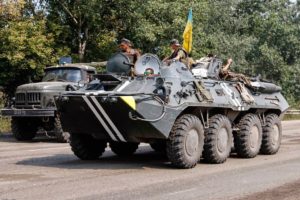 The International Court of Justice, or The Hague, ruled against Ukraine’s bid to force ’emergency measures’ on Moscow to prevent them from funding and supporting pro-Russian rebels in Donbass, or East Ukraine.

The court ruled Ukraine “has not put before the court evidence which affords a sufficient basis” to show that any funds from Moscow were used “to cause death or serious bodily harm to a civilian.”

Therefore “the conditions required for the indication of provisional measures” on whether Moscow had broken an international convention on terrorism financing “are not met”.

However, the court did have some sympathy with Ukrainian accusations that Russia was discriminating against ethnic minorities in Crimea.

“The court is of the opinion that Crimean Tatars and ethnic Ukrainians in Crimea appear to remain vulnerable,” said presiding judge Ronny Abraham, saying the court believed there was “an imminent risk” of “irreparable prejudice to the rights invoked by Ukraine.”

Moscow must “refrain from maintaining or imposing limitations on the ability of the Crimean Tatar community to conserve its representative institutions,” the judges ordered.

Russia must further “ensure the availability of education in the Ukrainian language” on the peninsula.

The court can take years to come up with a verdict and therefore Kyiv had sought the ’emergency measures’ to gain short-term relief to the conflict.

“Both parties shall refrain from any action which might aggravate or extend the dispute before the court or make it more difficult to resolve,” the judges ordered.