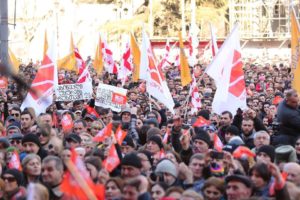 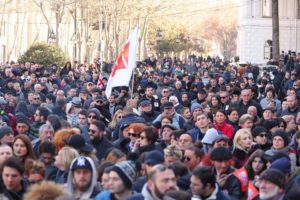 On February 19th, thousands of Georgians rallied in Tbilisi to support the country’s opposition TV Station – Rustavi 2, that they suspect is about to be transferred from current owners.

Rustavi 2 is Georgia’s most popular TV station and the Sunday demonstration on Tbilisi’s main avenue attracted people from a wide political spectrum. Journalists, opposition parties, and non-governmental organizations participated in the rally. Thousand of activists closed the main avenue for vehicles for more than 2 hours. 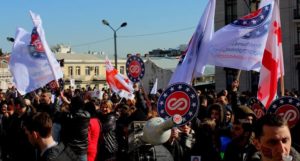 The crowd was first addressed by Deputy Director and Rustavi 2 anchor Zaal Udumashvili.

“Today we should stand together to tell the Government that they can never touch freedom of speech in this country. They will not be able to break us from the inside”, Udumashvili said.

Rustavi 2 has been considered a supporter of and supported by former ruling party National Movement (UNM). However, no one questions that it is important critical voice in the country, partly, because of its large audience, but especially because other large TV channels have gradually become more silent in their criticism toward the government.

The Supreme Court is expected to rule on the case soon. Station supporters claim the court is under government pressure to transfer it from current owners. If owners lose the lawsuit, Rustavi 2’s management may have to change its editorial policy.

The government’s claim that it has nothing to do with the legal battle over the Rustavi 2 channel is disbelieved by most Georgian political activists. Their skepticism was reinforced when former Prime Minister of Georgia, founder of Georgian Dream – ruling party, Bidzina Ivanishvili gave an interview in which he denounced the station as a “propaganda machine” for the opposition United National Movement.

Mr. Khalvashi, who is believed to be the prospective new owner of the station, sold the station more than a decade ago and now is trying to get the ownership back. Even though he and his allies have regularly denied it, Rustavi 2’s directors are alarmed, that if the station is handed to Kibar Khalvashi, the country’s pluralism will be fatally undermined.

A case concerning ownership of the TV channel is currently being reviewed by the Supreme Court, final decision will be issued soon. 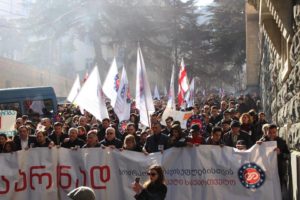