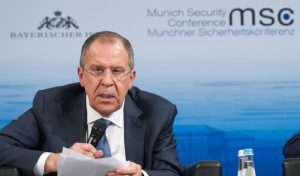 “Judging by certain statements at the Munich Conference, the cold war is still not over…Military cooperation should be resumed, (however) NATO’s Secretary General Jens Stoltenberg surrounded by his deputies yesterday could not say NATO is ready for it,” Lavrov said. “This is regretful.

“We do not agree categorically with those, who accuse Russia and new centers of global influence of attempts to undermine the so-called liberal world order,” he said. “Crisis of this model of the world was programmed even when the concept of economic and political globalization was invented mostly as an instrument to provide growth of the elite club of countries and its dominating all the others.

“We’ll see how will proceed our dialogue with the European Union, and with NATO,” he said. “Our position is confident and is based on honest provisions which we are sharing with our counterparts.”

“We cannot be delighted that the European Union does not find enough strength to refuse from forming its policy towards Russia basing on a principle of the smallest denominator when the member countries’ fundamental pragmatic interests are sacrificed to Russsophobic speculation on the principle of solidarity.

“We expect common sense to prevail,” he added.

“Our military have brought detailed suggestions (on transponders and aviation security above the Baltic – TASS) back in July, 2016 to the meeting of the Russia-NATO Council,” he said. “We expected those detailed suggestions would receive a feedback immediately – experts would sit and agree maps to raise the security.”
“This did not happen, and till now we cannot begin this work,” he continued. “Yesterday, NATO’s Secretary General Jens Stoltenberg told me there is hope the experts will meet up in March.

“Well, it’s quite a time, of course, but anyway, our conscience is clear,” he added.