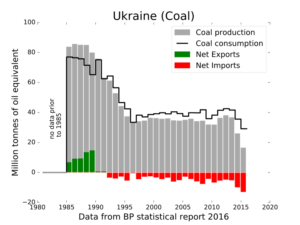 In spite of the conflict in East Ukraine that has taken 10,000 lives, the Ukrainian government in Kyiv has continued to trade in coal with the separatist East, even while they kill each other. It is an arrangement with the devil of sorts, where Ukraine needs the specialized coal for its power plants and the pro-Russian separatists need money to fund their war-torn areas of control.

Ukraine is nothing if not nationalist and these groups have begun to blockade the rail and auto routes where the trade has been taking place, declaring that it is wrong to trade with the enemy. Ukrainian President Petro Poroshenko has warned that the country may face rolling blackouts due to the lack of fuel for their coal-fired power plants. In addition he has raised the country’s reliance on nuclear energy during the emergency.

“I am pleased to report that we are sharply raising the share of nuclear energy in our energy balance,” he said in a statement, reports AFP.

The U.S. ambassador has even weight in, “We are concerned by the current disruption to the coal supply from the non-government-controlled areas of Donetsk and Lugansk and its potential impact on Ukraine’s energy system, the Ukrainian economy, and the Ukrainian people.”

The nationalists have been undeterred by the warnings, “All the threats by the corrupt authorities only confirm that we are on the right path and give us strength and inspiration,” they said in a statement.