In the early spring this year Russian President Vladimir Putin signed an order to begin the integration of South Ossetian military units into the Russian armed forces. Russia took the South Ossetian territory during the Russo-Georgian War of 2008 and has occupied the area ever since with Russian troops. Russia also recognized Georgia’s breakout region as an independent country whereas the rest of the international community did not.

The signed document about the integration of the armed forces stipulates that 150 South Ossetians will serve in the Russian Army. On June 2nd South Ossetia’s de-facto president Anatoly Bibilov told Tass reporters that this number might grow:

“The agreement lays out the conditions under which military units may be part of the Russian army, which is in accordance with the agreement on a single security perimeter of South Ossetia’s borders. This project has a bright future, and we, if needed, will increase the number of servicemen. Since this project is successfully functioning and developing, we will fulfill it,” Bibilov said.

The agreement reads that after the corresponding order issued by the commander-in-chief of the South Ossetian military, the Russian base with South Ossetian contract soldiers in required quantities should be completed within six months. De facto president Bibilov talked about this during St. Petersburg International Economic Forum. 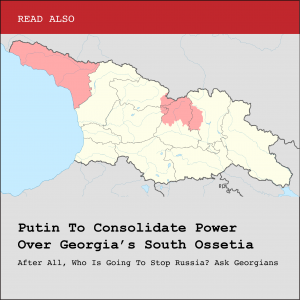 The Georgian government issued several statements, where Russia’s move was condemned, saying that the decision was “one more obvious step towards de facto annexation of South Ossetia”.

“International law does not recognize documents of this kind, therefore they are illegitimate. It is another matter that Russia is subjecting the cease-fire agreement of August 12, 2008, to revision. Therefore, we consider, that the next step will be annexation of the occupied territories of Georgia. “ – Declared David Dondua, Deputy Foreign Minister of Georgia.

According to the Russian Defense Ministry, the snap drills involve over 6.5 thousand soldiers and about 1.5 thousand items of armament and military equipment of the motorized, tank and artillery units, as well as the naval infantry of the Russian Black Sea Fleet and Caspian Flotilla.

On June 1, the Russian military bases in Abkhazia and Tskhinvali Region/South Ossetia opened their summer training period. In Tskhinvali, the military equipment, including T-90 tank, BMP-3 infantry combat vehicles and self-propelled howitzer “Akatsiya,” were presented at the opening ceremony. According to the Russian Defense Ministry, more than one thousand items of military equipment, including armor, have been prepared for their exploitation for the summer training period – Reports Civil.ge

The situation along the border with South Ossetia and the other Russian occupied area, Abkhazia, remains tense as Russian troops have repeatedly given rise to the provocations and moved the border controls further into Georgian territory. All this together with military exercises and joint agreements of South Ossetia and Russia are presented as combat readiness inspection in the armed forces, but meanwhile experts talk about Moscow’s far-reaching plans to gradually eliminate the armed formations of the region.

“Russia’s plans are easily predictable: the most efficient local units will join its army and are likely to be used in the hot spots of Syria and Ukraine, and the rest will simply be sent to the reserve. Russians do not need armed local people, who may oppose its plans. “ – Irakli Aladashvili, the editor-in-chief of the Arsenali military magazine.