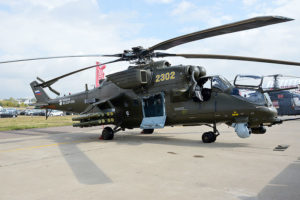 Force protection is critical in a foreign military engagement. Russia, it seems, is learning this the hard way. At least four helicopters and 20 trucks were destroyed at the T4 airbase near Palmyra, most likely by Grad rockets fired by the Islamic State. This is a significant loss to Russian forces in theater.

A pro-Kremlin website said the aircraft were “used by both Russian and Syrian air forces,” reports the BBC. An opposition website stated, “A large fire in the Syrian part of the T4 airbase spread to the fleet of vehicles, and after a fuel tank exploded four Russian helicopters nearby went up in flames. The cause of the fire is being established.”

“What the imagery tells us is that first of all this was not an accidental explosion, as some of the rumours kept saying,” Stratfor military analyst Sim Tack said. It shows very clearly that there are several different sources of explosions across the airport, and it shows that the Russians took quite a bad hit. An entire combat helicopter unit was wiped out – four helicopters in total – as well as some damage to some of the Syrian planes on the airport, and also very notably a logistic depot, likely one that was being used to supply those specific combat helicopters.”

In addition to the serious loss of equipment, the attack harms Russia’s ability to maintain extended supply lines in their shift of efforts from the Assad opposition to targeting the Islamic State, which is embedded West of the nexus of the Syrian civil war.

US Pushes For Clarity On Non-Acceptance Of Kazan Plan By Armenai, Azerbaijan