We at Tsarizm love to bring our readers unique opportunities to understand geopolitical threats. The situation in the South China Sea certainly fits into this category. We have been lucky enough to get in touch with Humphrey Hawksley of the BBC, who has a lifetime of on-scene experience in these matters. His book, Asian Waters certainly will bring you up to speed on this very dangerous scenario in the Pacific.

“A vivid and highly readable guide to one of the great flash-points of the 21st century”
Gideon Rachman, Chief Foreign Affairs Commentator, Financial Times

You can buy the book here!

The first book to break down accessibly the politics and tensions among the countries of the Asia-Pacific, by a foreign correspondent who has witnessed it firsthand.

China’s influence is now spread throughout the Asia-Pacific where great power interests collide amid the mistrust of unresolved conflicts and disputed territory. In the sphere of future global politics, no region will be as hotly contested.

The key flashpoint are clusters of remote reefs and islands from which China has created military bases enabling it to control a the expanse of the South China Sea, a crucial world trading route that it now claims as its own.

If China does get away with seizing and militarizing waters here, what will it do elsewhere in world and how far has it reached already. Bolstered by its South China Sea success, how are Beijing’s expansion plans impacting on India, Japan, Southeast Asia and even on Europe and America itself? Does it need to be restrained? If so, by how much. And if it is not, what will Russia, Iran or any government do when it sees that the international rule-book can so easily shredded and tossed aside.

No Asian country can take on China alone. Each is making its own arrangements with China or seeking protection from the United States. Most are doing both because America may be ill-equipped for the job at hand. Or could China be right when it argues that the US-led global system is tired, outdated and corrupt and needs to undergo massive reform or face extinction?

With its clear analysis and powerful story-telling, Asian Waters has already received high praise including from top-ranking government officials in Asia itself and from experts on both sides of the Atlantic. 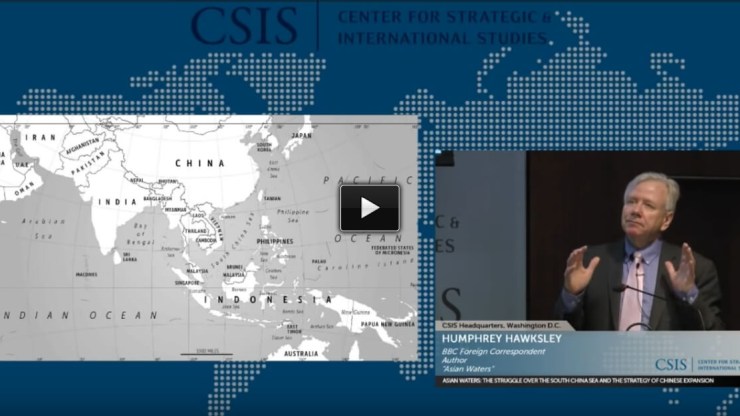 Reviews and Endorsements for Asian Waters

“Asian Waters deserves to be widely read and debated, all over the world.”
Bill Emmott, author of The Fate of the West: The Battle to Save the World’s Most Successful Idea

“A readable and very well-informed guide to an area of real tension in the early decades of this century.”
Chris Patten, last governor of Hong Kong, Chancellor of Oxford University

“With his solid, on-the-ground experience and incisive analysis derived from decades of first rate reportage, Humphrey Hawksley provides new ways of seeing and understanding the shifting balance of world power, a change of monumental significance for this century. Asian Waters seamlessly connects geography, history and great power intrigue across the entire Indo-Pacific region, increasingly the fulcrum of world history. His conclusions are surprising and often disturbing, but always based on the evidence. This book is a must-read.”
James Clad, Director, Asian Security Programs at the American Foreign Policy Council, Former US deputy assistant secretary of defense for Asia Pacific Security Affairs

“Humphrey Hawksley has long and rich experience of life in Asia, and has used this to inform this lucid, lively account of the frontier of Chinese aspirations – the region in which it sits. It is here that the true face of Chinese power is being revealed – the waters of Asia. There are fewer better guides to this than Mr Hawksley.”
Kerry Brown, Director Lau China Institute, Kings College, London and author of China’s World: What Does China Want? & CEO, China: The Rise of Xi Jinping

“Great power politics will define Asia’s future path. But in order to see what may lie ahead, it is critical to understand the people, the personalities, and the psychologies that drive the decision-making processes. Hawksley’s ability to do just that is second to none.”
Shihoko Goto, North East Asia Program, Wilson Center

“Hawksley masterfully pulls back the layers of history, old maps, and national pride that form the backdrop to one of Asia’s most dangerous flash points, the South China Sea. He argues convincingly that these disputed waters have become a litmus test of how far a rising China can push the boundaries of international law and still get away with it. Hawksley concludes with insightful suggestions about how China and the United States might learn to live together and what the disastrous stakes are for the globe if they clash.”
Murray Hiebert, South East Asia Program. Center for Strategic and International Studies.

“Asian Waters plays a critical role in defining India’s importance in the evolving geo-strategic matrix. The author is an old India hand and Asian Waters contains a wealth of knowledge, skilfully portrayed in his thoughtful book. To understand the new Indo-Pacific region, Asian Waters is a must read.”
Major General Ashok K Mehta, Institute for Defence Studies and Analyses, India

“Asian Waters is a timely, detailed and balanced examination of one of the crucial geo-political fault-lines of the twenty-first century. Its insights and analysis accurately map the complexity of the situation in the Asia-Pacific region, the choices open to policy-makers and a range of outcomes that could lead to cooperation, confrontation or conflict.”
Admiral Chris Parry CBE, (Rtd.), author Super Highway: Sea Power in the 21st Century

“A fine new book …As (America’s) technological edge erodes and its alliance system comes under challenge it will have to sit down with China and try to build a more equitable international order. This is the most important message of Hawksley’s book”
Literary Review

“Hawksley has a knack for delivering pointed arguments and parallels amid a concise array of key historical events.”
Yale Global

“The so-called re-emergence of great power competition has unleashed a cottage industry of pundits declaring that liberal democracy and a rules-based system of international norms are dead or dying. A better explanation has been offered by BBC award-winning correspondent Humphrey Hawksley. The author calls for an “Eastphalian” understanding of the region and of the largest power there — China. A most innovative geostrategic suggestion.”
Harlan Ullman, Arnaud de Borchgrave Distinguished Columnist, UPI

“In Asian Waters, Humphrey Hawksley brings to bear the experiences of a lifetime of watching and analyzing the transformation of Asia. This breezily written book, packing decades of reporting, interviews and analysis by an astute observer of the region, is essential reading.”
Global Asia

“One of the more impressive, if unnerving books, on the true tenuous lines of relationship between the US and China.”
San Francisco Review of Books

You can buy the book here!

Praise from Asia
“Hawksley’s Asian Waters breathes life into the well-worn subject of the South China Sea by painting a vivid and comprehensive picture of Asia’s maritime security. Asian Waters explores the perspectives of the key actors in the region, rendering a fuller understanding of the complex and multi-faceted security dilemmas in Asia. It is truly an impressive piece of work that is sure to inspire and engage readers.”
David Y L Lin, Representative, Taipei Representative Office in the UK, foreign minister 2012-2016

“Humphrey’s writing style is accessible even when his subject grows more complex, ranging from geographic diversity to narration about history and politics. This book is a helpful primer to better understand the tools available to those formulating the South China Sea policy. Whether it is navigating on the political waves in East Asia, or exploring the great power status, the book offers a generous insight. Humphrey is a respected analyst, and he doesn’t disappoint here.”
Dr Wu Shicun, President of National Institute for South China Sea Studies

“Interviews that run a wide gamut from fishermen to the heads of state.”
The News on Sunday, Pakistan

Humphrey Hawksley is the author of the acclaimed three part ‘Future History’ series beginning with Dragon Strike: The Millennium War that explores world conflict. His non-fiction includes Democracy Kills: What’s so good about the Vote and he has published five international thrillers, most recently, Man on Ice (Severn House, Jan 2018), named Thriller of the Week in the Mail on Sunday. His work has appeared widely in the international press including the Guardian, Times and Financial Times and his university lectures include Columbia, Cambridge, University College London and the London Business School. He is a regular panelist and moderator and has debated at Intelligence Squared and the Royal Geographical Society.

Book Launch: PAYING THE PRICE – THE UNTOLD STORY OF THE IRANIAN RESISTANCE – The People’s Mujahideen Of Iran

‘Putin’s Hybrid War And The Jews’