If you work for a large corporation making a six figure salary in anything but a purely technical capacity, your job is to lie. Day in and day out you use your literacy and numeracy skills to massage raw data into presenting false and misleading narratives leading to whatever conclusions and justifying whatever courses of action that the liars in chief occupying the executive floor have decided on. Your work product is then used by your own chief liars when they meet with their colleague liars from other corporations of from the government to negotiate deals that divide resources that are not theirs in ways that benefit them rather that you and your lower-floor counterparts.

Good corporate leaders, like MLB stars, know that they play for two teams: the unofficial all-star team of highly paid guns for hire and the team whose logo is emblazoned on their jerseys. They play with passion, they play to win, but in the end, win or lose, in September or in October, they take those private jets and fly away to their island mansions. Western politicians at the highest levels are no different; their allegiance to the countries they happen to lead at any given point in time is transactional at best. They play to win, but mostly they play to reach an outcome that would allow them to bamboozle their constituents into believing that they had won, thus reelecting them or whomever they wish to be elected. These leaders negotiate to generate outcomes that are at best acceptable for their countries, while at the same time optimizing the outcomes that reinforce their status as a supranational group of jet-setters who are above the laws of any country both while in office and for their entire lives thereafter.

The crucial point here is this: these so called “leaders” routinely sacrifice the wellbeing of their countrymen and women in order to ensure, at all costs, the protection and continuation of their own status in the present and for the future. President Trump’s upending of this tradition is, quite likely, unprecedented in history. Even in feudal times, kings and queens saw their allegiance first and foremost with their peer group to which they had close blood ties, rather than to their less noble subjects.

The famed Japanese sword master of the early 17th century, Miyamoto Musashi, wishing to learn the art of the Japanese halberd called naginata, sought the tutelage of the abbot of a particularly quarrelsome order of Zen Buddhists. Loath to waste his time, Musashi, whose fame had at that time already been considerable, invited the abbot to a test duel. This duel, not intended to be lethal, was to be fought with wooden weapons, and so Musashi, the inventor of the niten (literally: two skies) technique of fighting with both the katana (long sword) and the wakizashi (short sword) simultaneously, stood there with two short sticks in his hands while the abbot had what amounted to a long pole. As time went by, Musashi toggled between several guard positions, while the abbot stood still. Finally, Musashi laid down his bokuto (wooden swords) and admitted defeat, accepting the abbot’s tutelage. “There was simply no opening for attack”, he explained.

What Musashi meant was that keenly observing the abbot’s posture, all avenues of attack upon him, as simulated in Musashi’s expert brain, led to only one outcome: Musashi’s defeat. In the standoff between the Western Alliance led by Barack Obama and the Russian Federation, Obama was the anti-abbot. Putin the ex-KGB colonel saw that an act of aggression such as occupying and annexing the Crimean peninsula would draw no response beyond angry rhetoric and meaningless sanctions. Obama’s stance was one of weakness, of vulnerability. 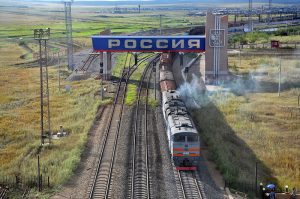 Image by Jack No1

If you are anything like me, you may have ordered that $24 double Courvoisier after the two Belvedere vodka martinis (stirred, olives) and the bottle of Saint Emilion premiere cru with the bone-in medium rare New York striploin. The next thing you hear is the alarm clock in your hotel room and you realize that you SHOULDN’T HAVE. That cognac was a mistake. It is not very likely that you are going to be your absolute best today, but the meetings with the clients will still happen and your livelihood and that of your family and your employees will still depend on the outcome of these meetings.

Obama was weak and feckless and as a result Crimea is now Russian. These are facts that can never be changed. And since we’re dealing with facts that cannot be changed, Russia, by whatever name you want to call her, whether the Russian Empire, the USSR, or the Russian Federation, is now officially dead. It is fresh road kill, carrion, ready to be creatively destructed, plundered, by whoever can get to her riches first. The extremities, the low hanging fruit, have already fallen, as they should, to their rightful masters. Eastern Europe, the Baltics, are in Western hands. Vast swaths of southern Siberia, with their magnificent but soon to be clear cut virgin forests now belong to China. While Russia’s industrial base and human capital do not, in all honesty, amount to a spoiled piece of marinated herring, the agricultural potential of Ukraine and Belarus is significant and the oil & gas reserves of northern Siberia are certainly a prize worth fighting for.

Big countries, big nations do not disappear; they do, however, become the vassals of more powerful and dynamic forces, often for many centuries. This has happened to India with its Turkic Muslim occupiers, the Moghuls, later replaced by the British. It happened to China, which was carved up between France, Britain, the US, and even Russia. And in earlier times it happened to Russia itself, when it was, for no less than four hundred years, the vassal of the Mongol Golden Horde. It appears that it is time now for Russia to reenter a period of vassaldom, the inevitable outcome of its regicide/suicide of 1918. This fact is well known to Vladimir Putin, and all his aggressive posturing, his cartoons of hypersonic missiles and other Dr. Strangelove doomsday shenanigans are simply plays to change the terms of Russia’s vassaldom, not stop its inevitable onset. Nature abhors a vacuum, and a country that occupies 11% of the planetary mass while producing roughly 1.2% of its GDP is the very definition of vacuum. 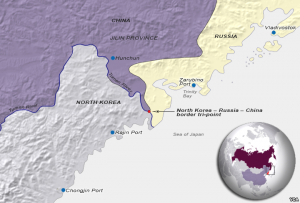 Simply put, Russia, like all vassals throughout history, will surrender its real independence, maintaining only the outward appearance of it mostly for internal consumption. The real question is to whom Russia will surrender its crown jewel, the energy sector. The outcome of this question will go a long way towards determining the initial conditions for the new cold war, the one that has already begun between the US and China. If China gains unfettered access to Russia’s energy resources, it will become a qualitatively more dangerous foe to America than it can ever become otherwise. Putin still has one role to play out on the world stage, that of pushing Russia into the arms the rising dragon from the south or the old foe from the west.

Trump’s push to reintegrate Russia into Western power structures such as the G8 is crucial to giving Putin the excuse he needs to choose America as his liege lord. After decades of anti-Western and specifically anti-American propaganda, Putin needs a strong cover story for his people, one that shows Russia as holding its own against its western adversaries. Putin also knows that China will be much harsher in its treatment of Russian people and Russia’s environment than America would ever be. All he needs is to save face, a few cheap gestures that cost nothing, but mean everything.

The old-guard team of politicos in skin-tight suits and funny socks are more interested in saving the face of their feckless bro Obama who for no good reason whatsoever allowed Putin to take over Crimea, than the long-term wellbeing of their own people. In this obstructionist endeavor, the G6-ers, all of whom are nothing if not America’s vassals, will suffer the fate of most rebels; they will be put down, brought to heel, taught a lesson. It will be fun to watch. 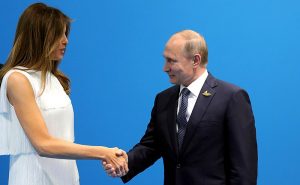 Iran Will Soon Face A Tsunami