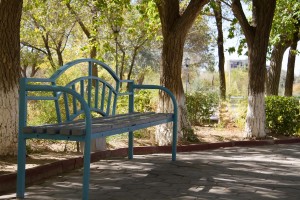 Kazakhstan is a destination off the beaten track and getting there is not that easy either. In case that you are a city trip kind of traveler, you better forget about it and spare yourself a big and costly disappointment. It’s rather surprising to take in after inquiring what sites to visit in the business capital of the country ‘the Ramstore supermarket, the new stadium, and the park’.

After several business trips to Almaty, Astana and Kyzylorda I still wonder whether anyone in Kazakhstan has ever heard anything about simple city planning. My sincere impression is that any yurt camp has more reason behind its set-up.

However, if you are open-minded enough and up for adventure…go ahead and you will see some of the most amazing landscapes ever. I shall never forget the breathtaking beauty of the snow-capped Tianshan mountain summits while approaching for landing in Almaty for the very first time, a fishing trip to Sorbulat, and a Karakum desert ride hat has left me truly speechless…

The key to having fun is to be extremely laid-back and prepared to just accept things as they come with a solid dose of humor.

It all starts with the technicalities – only the nationals of few sublime countries do not need entry visa so inevitably you are forced to deal with the bureaucracy of a post-communist young, tribally chartered state.

First of all, you need a letter of invitation, registered upfront with the local authorities. As many companies try to stay low-key and keep their business relations with foreigners as silent as possible, even as business traveler you may end up dealing with one of the many agencies that make a living on issuing “visa support letters’. The paper costs some EUR 240.00 while you will be charged some EUR 80.00 for the single-entry visa itself.

Prior to my very first trip years ago I had to deal with the consular section of a Kazakhstan embassy that was quite an infuriating experience. Not only I had to travel to another country to approach the closest consulate, but the declared office hours turned out to be merely an optional affair – for two days nobody bothered to turn up until the last 10 minutes of the declared two hours for interaction with the annoying public, despite the presence of dozen increasingly restless applicants. The end of office hours was strictly observed though…

So far, so good. How to get there? The easiest and most logical way is by air. There are not so many airlines servicing the destination though and consequently, even economy class airfare might make your heart skip a beat or two. Besides, most foreigners visiting Kazakhstan are involved in the oil and gas industry and traveling on rather unlimited budgets, therefore prices for services and at locations a foreigner might even think of are designed accordingly.

Getting there by car is tricky, takes a lot of time and requires a solid and absolutely reliable off-road vehicle. Although they are busy building modern ‘highways’, most of the time you’d be driving on roads with a moon surface profile. To cut a long story short – remember Ian McGregor on his “Long Way Round” in Mongolia? Then you know what I mean…

For some odd reason the flights of the few acceptable airlines tend to land mid-night, so after slowly passing immigration whilst admiring in awe the tallest peaked caps ever designed you will see yourself delivered into the hands of an aggressive crowd of crooks a.k.a. airport taxi drivers.

Even though I am fluent in Russian and know the tricks, and also always consult the female immigration officers on the current taxi fare rates, after adding a moderate foreigner cheat bonus and insistently making clear that we are talking entire ride fare, midway to the city you are being inevitably confronted with the claim that what was agreed was meant as per km rate. Hell yeah, why not dashing out hundreds of euros for an 11 km ride to something that may or not be downtown Almaty?!

No need to panic though – there are many police patrol ‘toll gates” along the route, and the cabin usually is intensely perfumed by vodka fumes, so you can always suggest to complete negotiations in police presence.

Nevertheless, also for this reason I am gravitating towards international hotel chains with security teams welcoming the guests rather than a concierge, so after getting hold of my suitcase and handing out the initially agreed amount at the last second, I leave it to them to finalize the ongoing financial negotiations.

Even a hotel ran by an international hotel chain is oh so charmingly local. A lunch snack with a colleague turned to quite an amusing affair. One of us ordered a grilled sandwich, the other a salad. The salad was swiftly served though we kept waiting for the sandwich. After waiting some extra ten minutes we have asked the waitress whether the sandwich would be coming soon. The girl meant “First eat salad. Then warm.”. Several attempts to make clear that we would like to eat simultaneously failed as she kept saying “No. Cook say – first cold starter, then warm starter.” So in the end she won and we had to eat in shifts between fits of insane laughter.

If you are an adept coffee drinker, you’re in trouble. Unless you are at a very upbeat place that sports even a real espresso machine, the best you’d get for coffee is Nescafe 3 in 1 (no other version available). Thus, my advise is to opt for the local drink and take a pot of good old tea.

Fancy an Irish coffee on an icy afternoon in the winter? You better forget your shyness and call for a straight whiskey – the recipe is unknown in Almaty, and even though an eager bar keeper might wish to oblige, you certainly will be able to refuse the offer to have your whiskey ruined by Nescafe 3 in 1 and spray-dry creamer.

Traditional local food revolves around horse meat and mutton. You’ve got to try the fermented horse meat sausage, it is really good, and you can’t say you’ve visited Kazakhstan without tasting THE local specialty called Beşbarmaq or ‘5 fingers’ (indication of how it’s being delivered to your mouth). Unless it is lambing season you can rest assured that the lamb on the menu is in fact the lamb’s grandfather. In case that you are not planning a trip out-of-town on the next day, you may also wish to taste the fermented mare’s milk drink – kumis.

Otherwise, your best call is really great Uzbek food – shashliks, and
delicious dips, along with the legendary plov.

Last but not least – Beluga caviar – try it, indulge on it, buy some to take home, just make sure to check upfront whether and what quantity you are allowed to import at your point of return from the “Land of the Free”.

Unless you are an extremely tough cookie, the North Pole is among your dream destinations and you are in possession of the relevant polar expedition gear or at least a set of politically incorrect fur outfit to engulf you head to toe, avoid the winter season by all means. Just remember that there is no natural or man-made barrier between you walking outdoors in Kazakhstan in the winter and the North Pole. Temperatures drop to minus 40-45 degrees C and you should consider the wind chill factor too. It is a truly mind-blowing experience…

My personal best are some minus 36 degrees in January, and I had to spend some 9 hours in an unheated service building that day… Although vodka will for sure suddenly become your best friend for staying conscious, ticking and alive, nothing at all can make you feel better or any warmer unless you are inside a well-heated building or vehicle. And well heated they are, at least in the big cities, Alas, the only way to adjust the room temperature of seemingly 45 degrees C plus is to open the window every now and then…

A visit to Kazakhstan in the dire winter is certainly an eye-opener as to start truly comprehending what it meant to be sent in Siberian exile by the tsar of Russia, in one of the GULAG camps or one of today’s prison colonies in Mordovia.

Don’t get me wrong…I actually love returning to Kazakhstan every now and again and I wish I had time to travel around and see even more of this vast and amazingly beautiful country. There I have seen also some of the most incredibly pretty human faces (result of extremely varied genetic heritage over the years), enjoyed a truly brilliant cover band performing classic rock at a very ordinary looking night club, and taken a horseback ride at stunning Chimbulak ski resort just outside Almaty middle in the night…

Just beware, as crazy as it is, after all the struggle for creating independent national states in the post-Sovjet era, Russian remains the lingua franca in Kazakhstan too.

Explore The Wonders Of Plitvice Lakes National Park In Croatia