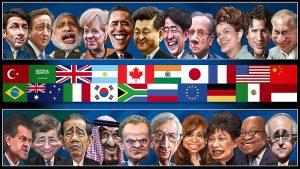 As recently as thirty years ago the world had two parents, America and Russia, who were fighting to keep custody of a bunch of whiny, needy, and unruly children. One of the parents was more about the stick than the carrot when it came to keeping the kids in check, and in all honesty, the carrots they had to offer were the limp musty kind that hide in the deep recesses of your vegetable “crisper”. The other parent, well, that was a different story altogether. That parent had all the new shiny toys, all the cool stuff. In fact, that parent MADE the cool stuff, infinite quantities of it, from blue jeans to rock-n-roll records. And so it’s no wonder that all the kids wanted to stay with the cool rich parent, after all who would ever want the strict poor one? Sugar beets and ballistic missile bases are poor substitutes for sidewalk cafés, to say nothing of drugs, sex, and heavy metal. Sure, a few gents still liked parading in their olive fatigues, Makarov pistols on their belts, spooking the crap out of the Washington, DC cognoscenti, but the trend was clear and finally the rich parent had it all.

The good life has an addictive quality to it; who would want to go back to hard work, to providing for themselves, when Uncle Sam has been doing it so exceptionally well for all these many decades? We want to give our citizens more free stuff! And when they become, Panda-like, too spoiled to engage in procreational rather than recreational intercourse, we want to import people from wherever they still do this kind of thing and give them free stuff too! We like green meadows with one cow per acre and beautiful lavender fields, and quaint hilltop vineyards, and when we send you our wine and cheeses and scented candles, we would like you to take them without duties, because it’s true that we always got our asses kicked and you always saved them, but you were kind enough to pretend we were your allies, so that’s how you treat your allies, right? 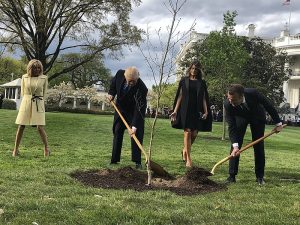 The thirty year-old Michael Rotondo, who was sued by his parents for overstaying his welcome in their home is the perfect poster boy for today’s so called G7. Fat, unkempt, incapable of performing the slightest task for which anyone unrelated to him would even consider paying, he apparently grasshopped his life away living on his poor parents’ dime, never thinking that the free ride would ever end.

It has been more than seven decades that the G6 “kids”, Italy, France, Germany, Japan, UK, and Canada provided for their own defense in an increasingly dangerous world. Not only have they extorted from the US an exorbitant price for their, in the case of Italy and France both shaky and useless, allegiance against the Soviet Union and later token participation in the war on terror, they doubled that price by avoiding making the necessary investments in their own defense capabilities, relying instead on America’s military umbrella. An entire class of people, entire global bureaucracy of hitherto unprecedented proportions grew on both sides of the Atlantic and the Pacific to facilitate the unimaginably large transfer of wealth from the American heartland to Europe and Asia. These bureaucrats happily lined their pockets with the hard-earned dollars of farmers in Iowa and factory workers in Ohio, places that they wouldn’t visit in their worst nightmares, just as these dollars, or what remained of them, were making their way to the manicured pastures and picturesque medieval towns of Tuscany, Burgundy, and Bavaria, conveniently rebuilt after WWII with Marshall Plan funds. 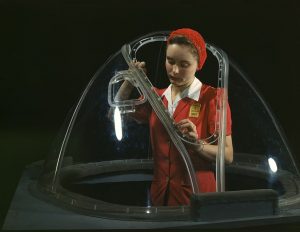 But wait, there is more! It turned out that the wealth transfer mechanism first developed and perfected for Europe and small Asian countries like Japan, South Korea, and Australia, was only just being warmed up, its real purpose hitherto hidden from view. When China was finally ready to ditch ideology for pragmatism, only then had the grand disembowelment of the American middle class kicked into high gear. The grand engine, designed, not as a side effect, but as its main function to transfer wealth away from America in the form of one-sided tariffs and regulations, finally reached its peak efficiency.

Truth be told, the maiden in distress that was America could hardly make a strong bid for a knight in shining armor. Obese, toothless, inarticulate, and addicted to drugs, it had none of the beauty, the grace, and the effortless power that had wowed and captivated the world seven decades prior. And so it didn’t get the knight in shining armor; instead it got a brash and profane New York real estate developer cum reality TV star. Yes, it took the kind of guy who made his name buying derelict properties for ten cents on the dollar in the mess that was 1970’s Manhattan and making them into the paradigm of luxury living to see beyond the shuttered windows, the shooting galleries, the flabby white fatrolls above the knees. With a crash diet of lower regulation and taxation, a few threats to globalist corporations, and some self-esteem speech therapy in suburban rallies, she is cleaning up pretty good, the old Miss USA. 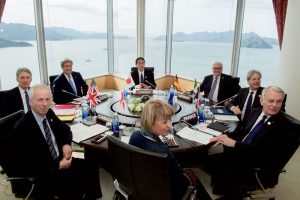 As often happens, things are still held together by double sticky tape, and low, low, interest rates, and good old spit and shine and trash talk with overpriced undereducated professional athletes as an easy foil. No, making Nicole the part-time hair stylist into Rosie the Riveter again will take something extra; it is time to serve one final notice to the Michael Rotondo’s of the world: it’s past time you paid your own damn bills. If you feel threatened and you want our protection, here’s the a la carte price list. Your cheeses cost more to produce because your cows roam free? Hard luck, you are still not getting away with one-sided protectionist tariffs. Your tourism sector will suffer if the cows go away? Great, Yellowstone National Park is open for business! 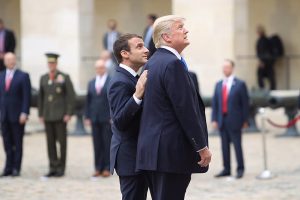 It will soon become very apparent that America’s squatting offspring have made quite a mess of it. No wonder they yelled “KNOCK!” when you tried to enter their room. Pull back the bead curtains, open the windows to get the weed smoke out and here it all is: rampant underemployment by the private sector and overemployment by the government, soaring unreported violent crime perpetrated by immigrant gangs, vast government subsidies to industries and agriculture, appalling educational standards, corporate welfare of epic proportions to prop up a charade of entrepreneurship and innovation, crumbling and wholly inadequate military infrastructure. But guess what, boys and girls, this cleanup is none of our business, we have our own mess to deal with, and its name is China.

Jeff Beauregard Sessions Is Either Scared, Blackmailed, Incompetent, Crooked, Or All Of The Above

Obama Said “The Buck Stops Here,” So Isn’t He Responsible for DOJ/FBI Corruption?

The Hi-Tech Traditionalist: America Has An Identity Problem