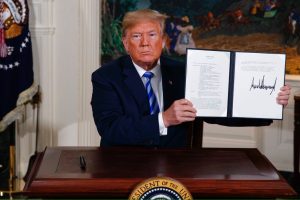 The seething rage coming from Obamaland is palpable — President Trump has withdrawn from the Iran deal, Barack Obama’s signature achievement. Of course the “deal” had nothing to do with the national security of the United States and everything to do with Mr. Obama and Secretary of State’s John Kerry’s so-called legacy. This is why they are so angry.

The deal was meant to do several things: Give the left something to crow about; give Mr. Obama a legacy; give Iran nuclear weapons; give Iran a lot of money to spend on more weapons; and setup the eventual destruction of the Jewish state (Iran publicly states this frequently and even writes it on their ballistic missiles. So, ugh, no. You can’t be intellectually honest and deny that.)

Bill Bennett said it perfectly Wednesday morning when he quipped on Fox News, “The Iran deal was not America’s word, it was Obama’s word.”

Mr. Obama and “Swift Boat” Kerry knew they could never get congressional approval, so with Mr. Obama’s pen and phone they crafted an agreement which would eventually destroy our children’s safety and security. Since they both hate America, along with Valerie Jarrett (from Iran), they obviously didn’t care.

You even had Mr. Kerry running around the world behind trying to stab Mr. Trump in the back and “negotiate” with Iran, and European leaders. This guy really does live on another planet — Planet John Kerry, where no ego is too large.

Can’t you just imagine the conniving, scheming and planning of evil deeds by a shadow government, plotting against our duly elected president?

All I can say is thank God for Donald J. Trump. This man is a rock, a man of steel. He has taken on this corrupt, evil cabal and is coming out on top. There is hope for the future.

It’s not over yet, but America is becoming great again. Soon it will be like Dr. Evil and his wicked clan were never here at all.

Why Were We In Syria Again? Let These People Fight For Their Own Freedom