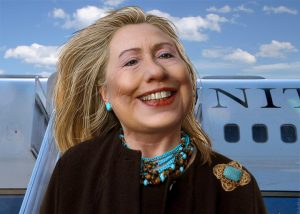 Those of us to the right of the political center in America, patriots who yearn for the return of rule of law and the righteous American ideals of freedom and equal justice, look with shock and disbelief at the legal charade and mockery of the Constitution which plays itself out every night on our televisions in our living rooms across this great land.

We truly can’t understand why this witch hunt gone wild is allowed to continue. We don’t understand why someone in power in the Department of Justice won’t stand up and end what is obviously a Deep State coup against a duly-elected president of the United States.

Well, I’ve been writing about this for some time but I think it’s time I said it again because the answer to these questions is very simple. This investigation is not about Trump. It is about Barack Hussein Obama and Hillary Clinton.

Rod Rosenstein, Robert Mueller, and the rest of their merry band of brothers know one thing all too clearly. They are not there to prosecute Trump; that is only a tactic to achieve the real goal. This entire drama has been played out, not to indict Trump, but to prevent the country from understanding how truly depraved, traitorous, and duplicitous the regime of Barack Hussein Obama really was. They cannot stop this investigation because if they do, Hillary, Obama, Kerry, Jarrett, all of them, go directly to jail without passing go.

Mueller is not a special prosecutor, he is a goalie, meant only to protect the truth from coming out.

In Russia, when Boris Yeltsin’s health was failing and it was obvious it was time for a new leader, good old Boris chose Vladimir Putin. Why? Because he was assured Putin would not prosecute his family for the billions and billions they had stolen by raping the country they were supposed to lead.

When Hillary lost the election, the Left in America was shocked. Hillary was supposed to play Putin’s role, to prevent anyone from finding out how deep the Hussein rabbit hole of treason really went. This is why Hillary famously apologized to Barack when she lost. “I’m sorry, Barack,” she said.

When it was obvious Trump was going to win, they had to come up with another plan. I have to admit, the plan was created with evil genius. They decided to try and bring down Trump with an orchestrated campaign to find, or create, some type of Russia collusion, to stop his agenda, delegitimize his presidency, and buy time to install another goalie in The White House.

Barack and his merry band of traitors weakened America on purpose. They moved hundreds of billions of dollars to their fat cat bosses in the union sector, they almost destroyed our military, they betrayed us to our enemies, they betrayed our allies, the divided us by race. In short, they did their best to destroy this great country, and get rich at the same time. As his preacher famously said, “God Damn America!” (And those white people too).

No, Mueller can’t stop. If he does, the entire house of cards comes crashing down. The Left will be finished in America for a generation. Barack, Valerie, Hillary and the rest of them go to the big house. Then we find out the real extent of their crimes against the people.

This is why Mueller will stop at nothing to remove Trump, or run out the clock till the next presidential election. This is why DOJ won’t release data to Congress. This is why the media is completely complicit. This is why Peter Strzok still has a job at the FBI. This is why Rod Rosenstein is so arrogant and obstructionist.

They will stop at nothing. The alternative is life in prison.

They still may get away with it.

Merkel Is Destroying NATO, Not Trump