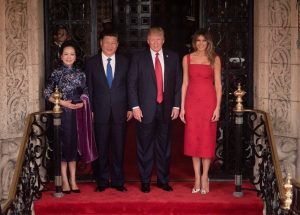 Chinese President Xi Jinping is worried. The Donald has his number.

Unlike the Clintons, who never met a Chinese bundler they didn’t like, and would sell the Lincoln Bedroom or our uranium for money, Trump doesn’t play that game. He actually cares about the country, and her people.

Xi’s achilles heel is his economy, contrary to the Mainstream Media narrative. China has a billion people. They all need to work. If they don’t work and make money to feed their families, they can get restless. If there is one thing the ChiComs are terrified of, it is social unrest. They remember how Lenin and Mao used populist unrest to unseat the previous holders of power in the Bolshevik and Cultural Revolutions, where the leadership, and anyone associated with them, was exterminated.

Trump is right. We have a half-trillion dollar trade deficit with China. They have bought and paid for our politicians for the last 30 years. This cannot continue.

Xi knows that if Trump cuts off the American market from their mercantile powerhouse, the communist government falls — no matter how many people they arrest or kill, no matter how much they oppress and control the internet. Enough pitchforks will bring down any government.

We’ve all heard of the ghost cities being built in China. The government has to keep building, no matter if there are no residents. If Trump cuts off the firehose of revenue from cheap goods, products that are dumped on the U.S. market, the ChiComs are done. They know it.

These truths are worth paying attention to as the Chinese show off their new-found naval power in the South China Sea, with an aircraft carrier, dozens of ships and 10,000 sailors and troops.

Trump has to “reset” the trade relationship with mercantile China. It is imperative for our future as a nation, for our manufacturing capability, and national security. It will also have the added benefit of slowing the Chinese military advance. Make no mistake, they mean to control the world. The only difference between Moscow and Beijing is that Xi is patient. They are playing the long game.

This is why the mid-term elections are so critical: to keep the GOP’s control of the House, to enable Trump to continue to make America great again. Electing Democrats will only enable China to achieve this goal faster.