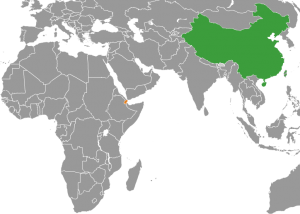 China has long been throwing large sums of money around Africa, and other developing regions, in an effort to expand Chinese influence across the world. The One Belt One Road project is an in-depth plan to further the Middle Kingdom’s mercantile power into Central Asia and Africa, even extending its reach into Eastern Europe and the Balkans.

With its strategic location guarding the Red Sea and the Suez Canal, the East African country of Djibouti looms large in China’s crosshairs — which explains why Beijing established its first overseas military base at the mouth of the Gulf of Aden.

The base will house upwards of 10,000 people and dwarf the nearby American, French, Italian, Spanish, and Japanese military facilities combined. Djibouti has long been an American bulwark in the region for its special operations forces, enabling quick deployment and power projection into the Middle East, or other African hot spots where terror groups grow. What’s more, the fragile nation of Yemen, across the Red Sea at the bottom of the Arabian Peninsula, has been a special area of focus for USSOCOM.

Djibouti is also a natural logistics hub, giving fast access to the Suez Canal, the oil rich Persian Gulf, and Northern Africa. Perhaps this is what makes the country so strategically important to the United States military, and its potential adversaries, in addition to the intelligence collection resources and the enablement of drone operations across the African continent. Needless to say that both of these capabilities are critical to the War of Terror.

But now, the presence of Chinese military boots on Djibouti’s soil is directly challenging American dominance in this critical area of the world. To make matters worse, China seems to be on a path to take over port operations in Djibouti as well, which would pose serious security and logistical problems for American efforts.

The Doraleh port facility was constructed a little over a decade ago, and has been managed since by DP World, a Dubai company with global port operations, which had a 30-year lease on the facility. In February of this year, after attempts by the Djibouti government to renegotiate the terms of the deal, President Ismail Omar Guelleh nationalized the port, throwing the geopolitical status quo in the region into disarray, and threatening American operations in the Horn of Africa.

DP World issued a statement on the situation and has brought the case to London arbitration: “The illegal seizure of the terminal is the culmination the Djibouti government’s campaign to force DP World to renegotiate the terms of the concession. Those terms were found to be fair and reasonable by a London court.”

Like his father before him, Guelleh has long been a U.S. ally. However, the political winds in Djibouti may be changing. Perhaps the promise of Chinese largesse is pushing this change.

There are rumors that a Chinese company will soon take over Doraleh port operations now that the government has terminated the DP World contract. No wonder that America’s top Africa general expressed concern during a congressional hearing in March, by warning that there would be “significant” consequences should Beijing take over the port.

China’s combination of tolerance of autocratic leadership, dovetailed with bottomless pockets seems to be working. We have seen China use this model in the Philippines to curtail American influence and presence in the country, and cozy up to President Rodrigo Duterte, another known abuser of democratic norms.

Warding off these challenges will require a two-pronged response from Washington: In the long run, the United States must develop a strategy to combat the Chinese promise of complicity in corruption with world leaders. But in the short run, America must deal first and foremost with Chinese encroachment on the Horn of Africa.

Until recently, Djibouti has been a reliable partner in fighting terror. At the same time, the U.S. has enabled Djibouti’s economic development and stability by providing aid and funding. However, as Guelleh continues to move in an autocratic direction, changing the country’s constitution to indefinitely extend his stay, seizing strategic assets from world partners, and enabling Beijing to gain access to key infrastructure, while at the same time taking on large amounts of Chinese debt, this relationship is no longer functional.Allowing China to enslave Djibouti with debt to ensure its loyalty is not in America’s interests.

Further supporting Guelleh will only damage American security interests and endanger the war on terror. Perhaps it’s time President Trump and his State Department look at supporting other political alternatives in the country who will stand with the rule of law, freedom, and democracy.

Recently Chinese President Xi effectively made himself president for life. That option also seems attractive to President Guelleh of Djibouti.

The world has enough kleptocracies. We should not enable the formation of another one.

It’s Orthodox Christmas And People Are Still Dying In Donbass

An Election In Kazakhstan Could Help A Region Advance