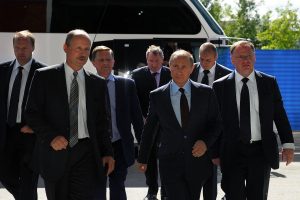 The Trump administration will move forward with plans to sanction Russian oligarchs with close ties to Russian President Vladimir Putin, declared American news outlets. Various reports are appearing in the Western media, with the Washington Post reporting six individuals could be targeted. The U.S. Treasury Department recently released a list of individuals who may face countermeasures.

Many of these business leaders have been attempting to find a way to appease the U.S. government and avoid being sanctioned. Having assets outside of Russia, exposed to the Western financial system, is a huge risk for wealthy Russians. Also, the ability to travel and send children to Western schools is a benefit these hugely wealthy people enjoy, at the Kremlin’s pleasure.

Russia may be forcing the oligarchs to return to Russia and return any stolen wealth as well. President Putin allowed an amnesty recently for those wishing to do so. Many believe the Russian security services were also behind a string of murders of Kremlin opposition figures in the United Kingdom, sending a message to those thinking about leaving Russia.

CNN also reported today the Special Counsel Robert Mueller’s team has been questioning wealthy Russians as they enter and exit the country, in an attempt to find information on Russian money finding its way into the 2016 U.S. president election.