Although Mikhail Gorbachev is heralded throughout the Free World as the man who allowed the Soviet Union to crumble under its own corrupt weight, he is not revered at home, not by a long shot, especially by the older generation who remember their perceived Soviet glory. The questions is frequently asked, are Donald Trump/Vladimir Putin tracking the Ronald Reagan-Mikhail Gorbachev relationship? Should we expect a similar outcome, a victorious West and a Russia in decline, vanquished by the superior technology and lofty morals of the United States and the continent?

Although there are similarities in the way Mr. Trump is coming into office on the heels of a weak, some would say seditious, president who weakened American power purposefully around the globe, the player on the opposite side of the table, Mr. Putin, is a different animal altogether.

Currently, there is a natural recalculation taking place around the world. With Mr. Trump firing on Iranian drones, shooting down Syrian jets, and lobbing dozens of cruise missiles on a Syrian airfield with Russian technicians just a few hundred yards away, it is obvious this is not Barack Obama’s foreign policy. To use a worn out phrase, there is a new sheriff in town and the our adversaries are taking notice. The Soviets experienced a similar effect when Reagan came into office and began talking about shooting down ICBMs before they reached American shores—visionary indeed. You could make the argument that it was the Strategic Defense Initiative (SDI) that brought down the Soviet Union. Mr. Trump has recently said the U.S. would win any arms race it’s invited to. So in this manner, the Trump-Putin relationship is very similar indeed.

However, Mr. Putin is not Gorby. He will not preside over another weakening of Russian power, no matter the consequences on the Russian people domestically. Mr. Putin played a bad hand masterfully during the Obama years. Russia is once again a force to be reckoned with on the world stage. The Russian president has pushed the exact, patriotic buttons needed to rally the public behind his offshore exploits and behind his government. Mr. Putin will not allow a repeat of the late 1980s, no just the opposite. He will leave office and enshrine Russia’s place as a great power in the world, just as it used to be for centuries under the tsars.

Don’t get me wrong; I’m not a Kremlin flag waver. However, the facts are just the facts and I’m not commenting on the consequences domestically for Moscow’s adventures or the effect of Mr. Putin’s rule on Donbass or Syria. We are strictly looking at the geopolitical chessboard for the subject of this article.

Today, the ideological struggle has broken down. It is no longer communist evil vs. capitalist freedom. Today, we see globalist masters pushing an agenda that destroys nations, cultures and the forgotten man in favor of a cult of death called Islam and its hi-tech emperors.
The West has lost the moral high ground.

Western capitals no longer feel their culture and history are worth saving. Progressives have a different agenda than helping their people become more prosperous. When the West vanquished communism at the end of the last century it never went away. It just went underground in our universities and in the media. It has now raised its ugly head under the guise of globalism. In other words, global redistribution. However, as with the Soviet Union, there will always be elites who get to shop at the best stores and travel the world while the proletariat struggles on their communal farms in Vladivostok or Toledo.

Mr. Putin is no longer a communist. He is a Russian nationalist. He is also smart enough to realize that the concept of a third Holy Roman Empire started with the tsars after the fall of Constantinople to the Muslims. For this reason, he has cultivated a large following among Christians in the United States and around the world, although this support is naive in the sense that it doesn’t understand Russia will always act for Russia and no one else.

Mr. Putin does have his weaknesses. The Russian economy is suffering under sanctions and the collapse of the price of crude oil on global markets. Russia needs money. However, unless it can shake off the yoke of the oligarchs and diversify its economy and improve the rule of law, she will continue to suffer.

Demonstrations by a resurgent political opposition have begun to surprisingly thrive across the country. Russian youth are harder to control by state media as social media supplants Kremlin propaganda channels.

In short, the struggle has changed. And although there are some similarities to the Reagan/Gorbachev model, the differences are more pronounced. 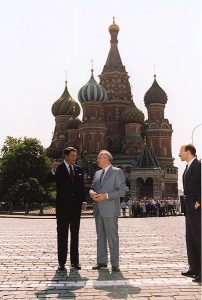 The West has succumbed to corruption, globalist communism and has lost the moral high ground. This was the foundation of Reagan’s success. We were the shining city on the hill.

Mr. Trump is trying to bring this back but the communist orks on the Left are throwing everything they have at him to stop it, hence the Russians are coming! hysteria in Washington.

It is far from clear if our new president will succeed. However, I’d bet money that Mr. Putin gets what he wants.