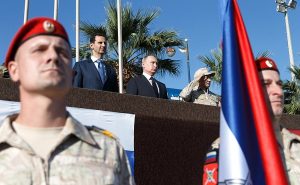 When Russian President Vladimir Putin gave the green light to Russian aerial bombing of rebel-held positions in southwestern Syria two weeks ago, he knew he was asking for trouble.

And he appears to be getting plenty of it.

Putin knows that in approving the operation, he wasn’t simply enabling Syrian President Bashar Assad and his Syrian military forces to extend the regime’s control to an area that has been controlled by various rebel militia for seven years…