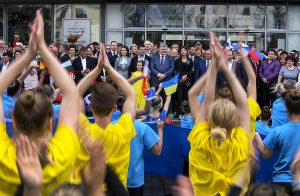 Image by The Presidential Administration of Ukraine

Ukrainian lawmakers have voted to dismiss Finance Minister Oleksandr Danylyuk after a public spat with the country’s prime minister, in a move expected to raise concern among the country’s foreign backers.

A total of 254 lawmakers in the 450-seat parliament on June 7 supported a motion submitted by Prime Minister Volodymyr Hroysman to fire Danylyuk, a respected reformer backed by the International Monetary Fund (IMF).