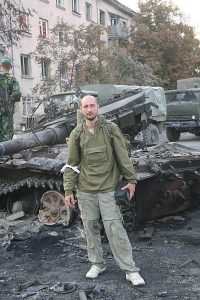 It seems the security services of Ukraine staged an assassination to catch an alleged Russian assassin who they say has been apprehended and is in custody…developing.

“The head of Ukraine’s Security Service (SBU) says Russian journalist and Kremlin critic Arkady Babchenko is still alive, a day after Ukrainian authorities announced he had been killed by a gunman at his apartment in Kyiv. SBU chief Vasyl Hrytsak told reporters on May 30 that Russian security services had ordered the killing of Babchenko. Babchenko appeared on a live television briefing presented by the SBU on May 30, saying the fictitious reports of his death were part of an operation that had been prepared for two months. Babchenko thanked Ukraine’s SBU for saving his life,” reported RFERL.

Here is the Kremlin’s response…