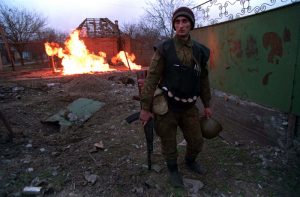 Borz (not his real name, for fairly obvious reasons) was in many ways the stock image of the wily Chechen of a certain age: a spry man in his indefinable sixties, with the weathered skin and deep wrinkles that spoke of a hard life and an outdoors one, at that. But he had a cheerful smile, a sparkling eye, and an energy to his speech and his movements that transformed him into someone younger, vital, unstoppable. He was also one of the most skillful and expensive contract killers in Moscow.

That made him a fine example of one of the most feared figures in the Russian underworld: the wild Chechen. Back in tsarist times, the Chechens’ skill and ferocity had been proverbial in Russian circles. Gen. Alexei Yermolov, imperial viceroy of the Caucasus, was especially exercised by this “bold and dangerous people,” and one of his staff officers admitted that “amidst their forests and mountains, no troops in the world could afford to despise them” for they were “good shots, fiercely brave, [and] intelligent in military affairs.” Their ability to hold their own against modern Russian firepower and numbers in the long and brutal Chechen wars of the 1990s burnished their image internationally…