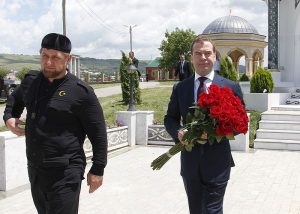 Chechen leader Razman Kadyrov has been accused of oppressing, torturing, even killings gays inside the Russian, primarily Muslim Republic. However, he completely denied these reports in an interview with HBO’s David Scott during an episode of Real Sports With Byrant Gumbel, reports Breitbart.

Kadyrov dealt with the issue simply by saying there are no gay people in Chechnya so therefore, the allegations must be untrue. “This is nonsense…We don’t have those kinds of people here. We don’t have any gays. If there are any, take them to Canada.”

“Take them far from us so we don’t have them at home. To purify our blood, if there are any here, take them,” Kadyrov added.

Kadyrov also dismissed criticism by the United States, “America is not really a strong enough state for us to regard it as an enemy of Russia,…We have a strong government and are a nuclear state. Even if our government was completely destroyed, our nuclear missiles would be automatically deployed.”

Will U.S. Secretary Tony Blinken Call Out Zelensky For Religious Intolerance In Ukraine?