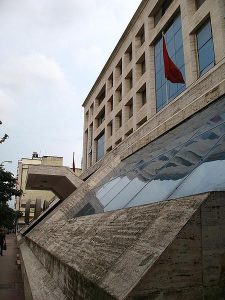 Things seem to be moving forward in Albania regarding its corrupt judicial institutions.

The Head of the General Prosecution Office, Arta Marku, though temporarily appointed, has designed a medium-term strategy for 2018-2020, aimed at fighting corruption and organized crime at high levels. The strategy foresees a series of essential actions, like setting up the National Investigation Bureau, Special Prosecution Office and Special Court, in close cooperation with its EU and US partners, who are also offering training for Albanian prosecutors and judges.

Justice reform is one of the most urgent issues for Albania and is happening through the vetting process. It is also one of the most demanded actions by EU, key to a possible opening of negotiations in June. The established institutions, together with the General Prosecution Office, will investigate all those officials who have abused power and have been involved in corruption and organized crime. They are verifying their wealth and property; many judges and prosecutors have been left out of the judicial system.

The internationals that are present in Albania, like EU Ambassador Vlahutin and US Ambassador Lu, have always underlined that this process should start with the “big fish”, referring to the former or current high officials that have been involved in corrupt affairs and organized crime.

The first outcome has been produced-an order for the home arrest of the former Interior Minister from 2013-2017, Saimir Tahiri, who is accused of links with a criminal group of cannabis traffickers arrested in Italy and Albania. Such news was even reflected in the international media, such as the New York Times and Associated Press. The internationals have welcomed the action of the Albanian judicial system and declared official channels should decide on his being guilty or not. Albanian Prime Minister Rama has asked for an independent and transparent process. In the meantime, some analysts think that Tahiri is condemned morally, politically and publicly, although there are not evident proof for any crimes committed.

The next warrant for arrest will be that of the former Head of Prosecution Office, Adriatik Llalla, who is not in Albania for the moment. He settled in Germany together with his family a couple of months ago. He is accused of connections with corrupt politicians, closing many files that would have probably sent many of them to prison. Even his property is under investigation, showing he is a very wealthy person. His close collaborators are under investigation as well.

Meanwhile, an Albanian band of drug traffickers has been destroyed in Turkey and the head of the group, Met Kanani, and 14 members were arrested. Another drug trafficker, Arber Cekaj, is under arrest in Germany. Their extradition to Albania could possibly bring out connections with corrupt politicians. Some names of important officials are being announced by the media; many are already selling properties and sending families abroad. It remains to be seen if all this is true and if they are really involved with crime, as it could result in a an earthquake in Albanian politics.