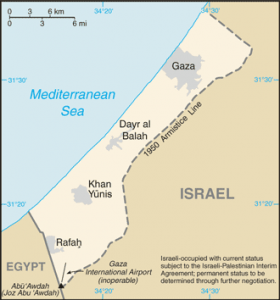 If you read the headlines coming out of the ‘progressive’ media regarding the violence in Gaza, you are presented a false narrative. In other words, they are lying, diabolically so. The story told by the those who hate Israel, in other words, hate freedom and those that uphold it, like the only functioning democracy in the Middle East, is a story that is simply not true.

For instance, Israel is not arbitrarily killing so-called Palestinians. There is an organized effort, funded and orchestrated by Iran, which is trying its best to destroy the Trump agenda in the Middle East, as revenge against the American withdrawal from the JCPOA. There is also a longer-term more-important agenda for these enemies of Israel, to destroy the Jewish state once and for all.

Think about it. What better way to hurt the Trump administration than to orchestrate a news narrative of the ‘evil’ Jews killing the innocent Arab kids, as the White House strives to finally move the American embassy to Jerusalem, and attempts find a peaceful solution to the conflict.

Here is the truth. Hamas is pushing Arab kids to mass and attempt to penetrate the Israeli border. Hamas has been planting improvised explosive devices (IEDs), and grenades, in an attempt to kill Israeli soldiers. If these rioters were allowed to penetrate Israel proper, they would most certainly kill any Jew they could find.

Here is how The Times of Israel reported some of the facts on the ground, ”Israeli planes carried out airstrikes in the northern Gaza Strip early Monday morning, the army said, hours after a group of Palestinians entered Israeli territory from the enclave and planted two improvised explosive devices along the Gaza security fence.”

No self-respecting sovereign nation would permit such activity on its border, as Ambassador Nikki Haley so eloquently put into words.

The glaring omission of the facts in supposedly mainstream media reports of Palestinian malign activity, is bordering on criminal. At a minimum, it is journalistic malpractice. It is propaganda.

Perhaps those outlets spreading these false facts should be required to register as a foreign agent, as they are not working for American and her allies. They are working for our enemies.

Escalation: Nujaba’s Kaabi And The February 16 Rocket Attack On US forces In Iraq