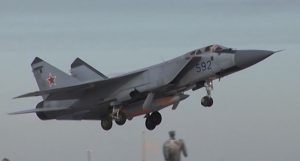 A Russian weapon the U.S. is currently unable to defend against will be ready for war by 2020, according to sources with direct knowledge of American intelligence reports.

The sources, who spoke to CNBC on the condition of anonymity, said Russia successfully tested the weapon, which could carry a nuclear warhead, twice in 2016. The third known test of the device, called a hypersonic glide vehicle, was carried out in October 2017 and resulted in a failure when the platform crashed seconds before striking its target.

Russia Passes Law Preventing Criticism Of The State As Citizens Worry About Loss Of Internet Freedom, Or Worse