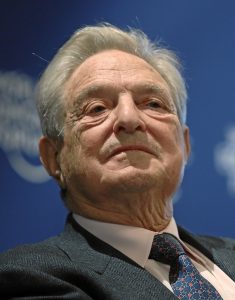 Open Society Foundations, the George Soros backed organization that has helped create the economic migrant crisis in Europe, is leaving the Central European nation of Hungary, declaring it cannot ‘protect its employees from government’. The liberal media has attempted to portray the Hungarian governments efforts against the foundation’s activities, as anti-Semitic, referring to alleged similar activities prior to the Second World War.

Nothing could be further from the truth. Hungary is simply attempting to stop the millions of Islamic migrants who are leaving the miserable economic conditions of the Middle East and North Africa, drawn by ‘progressive’ open-border policies, from destroying their own culture and security forever, as has happened in Western Europe.

Open Society Foundations will move its international operations in Budapest to Berlin in Germany, according to a press release Tuesday.

“The government of Hungary has denigrated and misrepresented our work and repressed civil society for the sake of political gain, using tactics unprecedented in the history of the European Union,” said Patrick Gaspard, president of the Open Society Foundations, reported CNBC.

“Orban now wants to enact laws that force non-governmental organizations (NGOs) to register with the government. Foreign funding for activities related to migration would be subjected to a 25 percent tax. Open Society Foundations said Tuesday that it would seek legal routes to challenge the new legislation. “The so-called Stop Soros package of laws is only the latest in a series of such attempts. It has become impossible to protect the security of our operations and our staff in Hungary from arbitrary government interference,” CNBC added.

The nations of the Visdegrad Group, have banded together to prevent additional migrants from entering their countries in recent years, save Slovakia which has made a deal with the EU. This has caused Brussels to issue threats to the region to cut off funding and other sanctions.

Russia To Move Troops To Disputed Kuril Islands Near Japan