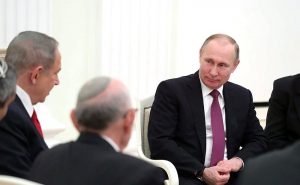 Israeli Prime Minister Benjamin Netanyahu traveled to Moscow to sit beside Russian President Vladimir Putin during the Victory Day Parade in Red Square to celebrate the Soviet victory over the Nazi regime.

One consequence of the disastrous Obama presidency has been the loss of American influence in the Middle East. Tsarizm has written extensively about the need for Israel to build trust and accommodation with Russia since the Jewish State could no longer count on the United States as Obama and Kerry were Hell-bent to give Iran the bomb.

The developments in the region, with President Trump withdrawing the U.S. from the flawed JCPOA, make the need for consultation with Moscow especially pertinent.

“I am now leaving for an important meeting with Russian President Vladimir Putin. The meetings between us are always important and this one is especially so,” Netanyahu said shortly before his departure…In light of what is currently happening in Syria, it is necessary to ensure the continued coordination between the Russian military and the IDF,” declared Netanyahu, reported Israel National News.

“Israeli Prime Minister Binyamin Netanyahu and Russian President Vladimir Putin on Wednesday marched together with Serbian President Aleksandar Vučić at Russia’s Victory Day parade. After the parade, the leaders placed wreaths of flowers on the anonymous soldier’s grave, at a memorial for soldiers in the Red Army who fell during the Second World War and whose gravesites are not known. They also placed flowers on the memorial stones for the “heroic cities,” as their national anthems played in the background,” wrote Israel National News.

More Massive Demonstrations In Minsk…Lukashenko Arrives With A Rifle