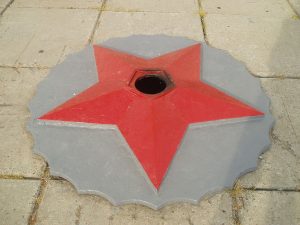 Image by Guttorm Flatabø, Soviet Star now used as trash can in Transdniester

The frozen Soviet conflict of Transdniester in Eastern Moldova may have begun to thaw ever so slightly. This week, representatives from the separatist government in Tiraspol, Transdniester, and counterparts in Chisinau, the capital of Moldova, signed an agreement for vehicular traffic from the breakaway region to travel legally outside its borders. The agreement was pushed along by the OSCE.

“The owners of vehicles in Moldova’s separatist region of Transdniester will receive neutral registration plates and will be allowed to participate in international road traffic as of September this year, according to an agreement between Chisinau and Tiraspol backed by the Organization for Security and Cooperation in Europe,” reported RFERL.

The region was one of the first ‘frozen conflicts’ of the former Soviet Union as war broke out in the early 1990s, after the fall of the USSR, between a newly independent Moldova and pro-Russia forces in Transdniester. Several hundred people were killed. There are approximately 2,500 Russian troops inside the area, most of them considered ‘peacekeepers’. They also guard the aging, massive Soviet ammunition depot in Transdniester.

The new Moldova government, in a bid to move towards the European Union, has made it a priority to get Russian forces removed from its territory. Moldova has been locked in an existential conflict with Kremlin security services and hybrid warfare for the last decade due to its desire to be part of the Western landscape.

“The United States supports a comprehensive settlement of the Transnistria conflict, and we welcome this week’s agreement to allow vehicles from Transnistria to legally travel on roads outside of Moldova. This will bring real benefits to the lives of people on both sides of the Nistru River. We urge all sides to capitalize on this agreement and implement the three remaining “Package of Eight” deliverables that the sides reaffirmed in the 2017 Vienna Protocol. This is the only path to a settlement of one of Europe’s longest-running conflicts. Any such settlement must be based on the sovereignty and territorial integrity of Moldova, with a special status for Transnistria within Moldova’s internationally recognized borders,” declared State Department Spokesperson Heather Nauert.