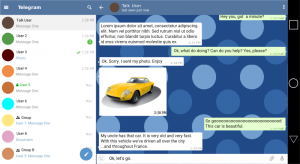 Russian online watchdog Roskomnadzor banned thousands of IP addresses globally in an attempt to shut down the popular messaging app Telegram, which encrypts user communications and prevents government spying. The Russian government said the actions were taken because Telegram would not hand over encryption keys. Russia has banned other internet sites like Linkedin for not locating servers within the country and therefore allowing surveillance of user communications.

Roskomnadzor’s head Alexander Zharov said it had blocked 18 sub-networks and a significant number of IP-addresses belonging to Google and Amazon, the Interfax news agency reported.

“We have currently informed both companies that a significant number of IP addresses located in the clouds of these two services have fallen under the block on the basis of the court ruling (to block Telegram),” Roskomnadzor’s head Alexander Zharov was quoted as saying.

Russia had previously banned virtual private networks, or VPNs, in a bid to track its citizen’s use of the internet.

Telegram CEO Pavel Durov, himself a Russian emigre, called on Tuesday for “digital resistance”, saying he was prepared to give out millions of dollars worth of grants in bitcoin digital currency to individuals and companies that run proxies and VPNs to support internet freedom.

However, it seems that in a bid to stop Russians from using the Telegram service, Roskomnadzor shut down much of the internet infrastructure needed to run simple operations inside Russia. Residents of one apartment building were prevented from operating the gate allowing vehicular access to outside the residential complex and were stuck inside for hours. Other similar stories flooded Russian social media over the last few days. “I can’t leave my apartment to get to work but Telegram is still working,” Russians smirked.

In the end, it seems Roskomnadzor even banned itself, having to request some domains be unblocked as their internal processes were reported to have been shut down by the IP address blockage.

Russia's attempt to ban @telegram is such a colossal clusterfuck that I'm at a loss for words to describe it. Dozens of entirely unrelated websites (including Roskomnadzor's own) and online services are down. Telegram still up. As well as ALL of previously blocked websites.