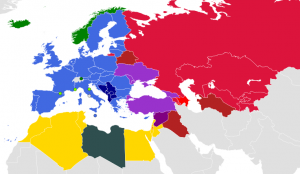 The European Commission passed to the EU its official recommendation for starting the negotiation process for Albania and Macedonia accession. Federica Mogherini, the EU’s High Representative of Foreign Affairs presented the progress report for Western Balkan countries in front of the Foreign Commission of the European Parliament in Strasbourg. In her declaration, she stated that WB countries belong to the EU’s future.

“We have noticed positive changes and progress towards the EU. Recently, the countries of the region have made significant reforms and have modernized their economies. Out of the 6 WB countries, Serbia and Montenegro have started accession discussions. Today, the EC recommends that the EU open negotiations for Albania and Macedonia. We are working for Bosnia and Kosovo progress as well. Each country is assessed based on its merits for its reform accomplishments. The Western Balkans are a common responsibility. EU enlargement will increase the stability and safety of the continent”.

Johannes Hahn, the Commissioner for Enlargement, stated: “Our recommendations come as reciprocal moves; Albania and Macedonia have performed their homework. We have noticed tangible outcomes and this is the start of a very promising process. So, our recommendations are justified. Of course, Albania will continue with its main priorities: public administration, organized crime, judicial reform and minorities.

Jean Claude Juncker also expressed a pro-negotiation stance and warned about a reverse decision. “The EU should accept new members from the Western Balkans in order to avoid another war in the region”, he said, calling the area a hotspot and recalling the ethnic wars of the 1990s. “If we do not open a European perspective for WB countries, we might see the return of old national conflicts”.

Among other EU countries, Poland, Italy and Austria are in favour of increasing efforts to open the way to WB accession, considering China and Russia’s growing influence in the region.

France and Germany have expressed an opinion against EU enlargement. French President Macron stated the EU should improve its internal governance before accepting new members.

Federica Mogherini is paying a two-day visit to Tirana. She will then continue her visit to Skopje, Podgorica and Belgrade.

Definitively it will be the European Council which decides on opening negotiations with Albania and Macedonia at its meeting on 17 May, where the leaders of the six WB countries will also take part. Until then, there will be a difficult lobbying process, as any EU member state could decide against starting negotiations.