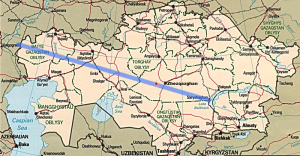 Fears of another nuclear accident grew in late 2017 when abnormally high traces of Ru-106, an isotope only produced by the splitting of atoms, were found in the air over Eastern and Western Europe. Initial suspicions focused on Russia and Kazakhstan as the likely source. Both countries denied knowledge of any accidental or intentional release which could have produced the cloud of radioactive material.

A group of experts formed to investigate the incident had now decided there was not enough information to pinpoint the origin, Sweden’s radiation safety authority, one of the group’s members, said on Monday. “Available data does not provide sufficient information to verify that the Ru-106 emissions originate from any of the activities that have been assumed to cause the event,” the Swedish authority said, reported Reuters.

“The commission of experts met last week and decided that its member groups – from Russia, Sweden, France, Germany, Britain, Finland and Norway – could return to their countries and carry on their research independently, said Sweden. France’s nuclear safety institute IRSN said in November that the likely source was an accident at a nuclear fuel treatment site or centre for radioactive medicine. It said its findings ruled out a nuclear reactor,” added Reuters.

Concerns over another radioactive release brought back memories of the Chernobyl disaster where Soviet authorities refused to admit the scale of the meltdown in the town of Pripyat, Ukraine. Even today, the site is highly radioactive and unsafe for humans. Another concrete sarcophagus was recently installed over the former reactor to seal it for another hundred years.