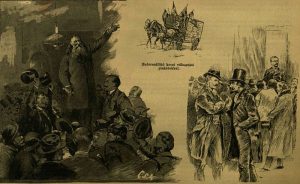 Hungarian Prime Minister Viktor Orban’s Fidesz party won a massive mandate in today’s election against open borders and illegal migration, a policy pushed by the globalist government in Brussels. With most of the vote counted, Orban’s party has regained a possible ‘super majority’ in parliament.

Orban at a rally to supports declared, “We won…We created the opportunity to defend Hungary. A great battle is behind us. We have achieved a decisive victory.”

“With 84.7% of the votes counted, Fidesz and its small ally, the Christian Democrat party, had secured 133 of the 199 seats in the legislature, the minimum needed for a two-thirds majority. The right-wing nationalist Jobbik party placed second with 26 seats, while a Socialist-led, left-wing coalition ran third with 20,” wrote Associated Press.

Orban has waged a relentless campaign against wealthy financier George Soros, who is Hungarian, against his globalist agenda, financed by his immense wealth. It seems to have worked, touching a raw nerve with the Hungarian people who are worried about their security and Christian culture.