Tension arose in the northern part of Albania due to the enforcement of a tax on “The Nation’s Road” highway, connecting Albania to Kosovo.

Hundreds of Kukesi inhabitants, a small town near the Kosovo border, clashed with police after they tried to block the thoroughfare. The protesters vandalized the tariff kiosks, destroying and burning them. There were several slightly wounded on both sides. The police arrested 23 rioters and today they will be sent to court.

A tariff of 5 euros for cars and 10-20 euros for bigger vehicles were discussed years ago after the highway was constructed. The contract between the Albanian government and the private concessioner that is responsible for the road maintenance foresees that in a short period of time, they will design a special scheme for frequent users to pay less. The government should take into consideration the construction of a second local road, so that people living alongside the highway have another possibility to travel without paying.

The enforcement of the tariffs, without recent prior notice or parliamentary discussion, caused the situation to deteriorate. 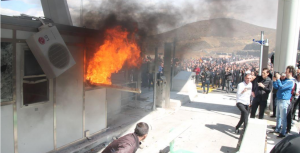 The Albanian opposition leaders of the Democratic Party (DP) and Socialist Movement for Integration (SMI) are exploiting the situation to organize popular protests against the government, calling such movement “Civilian Disobedience”. Their slogan is: “Let’s block the roads. Stop paying taxes!” They also refer to other taxes newly enforced on citizens and businesses.

Their plan is to block all roads first, then governmental institutions and even parliament. They have suggested the PM’s expulsion from parliament.

Many consider the tariff on Nation’s Road not only as a financial burden for the citizens of both countries, but also as a political effort to divide Albania with Kosovo. According to Albanian Prime Minster Rama, that is not a tariff established patriotically, so there was no need to consult with the Kosovo government first. The tax was foreseen since DP was in power, as the highway was constructed during this period. The opposition is using the Kukesi riots as “fuel” against the country’s European integration, states Rama.

This is a crucial moment for Albania, as by mid-April the EC will discuss the country’s performance on reforms required by the EU for opening negotiations in June. The country is divided between two opposite opinions. Many believe the political instability will serve only to the country’s detriment and violence is not the right way to reach compromises.