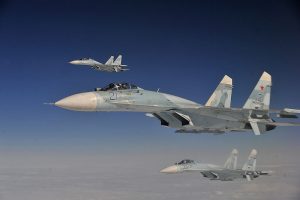 The Russian Defense Ministry reacted smugly to American complaints of Russian pilot behavior during a recent Russian intercept with an American reconnaissance aircraft over the Black Sea, near the Russian mainland.

The Pentagon’s allegations about what was described as unsafe interception of an EP-3 US radio-electronic surveillance plane by a Sukhoi Su-27 jet over the international waters of the Black Sea near Crimea on January 29 sparked the reaction.

“The Aerospace Force will continue to maintain the reliable protection of Russian airspace. Should American pilots, knowing this fact, fall into depression or succumb to any phobias, we advise the US side to exclude these flight routes near Russia’s borders in the future, or return to the negotiating table and agree on their rules,” said the defense ministry, reported Russian state news agency TASS.

“Similar maneuvers by NATO planes near Russia’s Aerospace Force planes over the Baltic, Barents, Norwegian and North seas cause absolutely no effects on Russian crews,” the ministry added.

The defense ministry claimed the incident should be called an ‘escort’ as the SU-27 flew alongside the American plane for over two hours and ‘prevented’ the aircraft from moving closer to the Russian mainland.

“We would like to address the commander of the 67th Task Force of the 6th Fleet Bill Ellis with a reminder Crimea is an integral part of Russia,” the Defense Ministry said.

“Also, we would like to draw attention to the fact that it takes Russia’s fighter planes just minutes to ‘intercept’ air targets approaching the state border with their transponders turned off. For this reason all actions by Russia’s Sukhoi-27 plane, which for more than two hours and twenty minutes prevented the US radio-electronic surveillance plane EP-3E from approaching Russia’s air space near Crimea should be correctly called ‘escort’.”