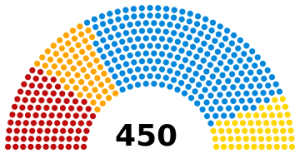 Russia’s independent pollster, Levada, is not loved by the Kremlin. The company has been targeted under Russia’s new ‘foreign agent’ law because Levada allegedly receives some foreign funding. Levada has denied these accusations, calling them ‘complete garbage.’

“They simply want to shut our mouth,” Lev Gudkov, director of the Levada Center, said in a telephone interview. The group’s surveys had shown likely turnout in the March 18 contest at about 52-54 percent, far below the levels reported by the two other main polling companies, both of which are controlled by the government. All three show 70-plus percent support for President Vladimir Putin, but low voter participation could undermine Kremlin hopes of winning a resounding mandate in the vote, reported Bloomberg.

The Kremlin needs a large turnout and large percentage of the vote for current Russian President Vladimir Putin in order to confer legitimacy. Opposition figure and anti-corruption activist Alexei Navalny has called on Russians to boycott the election and has named a date for massive rallies in at least 85 cities in Russia on January 28th.

Levada has stated they will conduct polls during the election but will not publish them to avoid being shut down as a pollster due to their current status under the ‘foreign agent’ law.

Kremlin spokesman Dmitry Peskov said last week, “Of course, Levada is a big organization that has a reputation, but unfortunately, by law it is an agent and it can’t perform this kind of activity.”

The Russian presidential election is March 18th of this year.

How Azerbaijan, Georgia, And Turkey Subverted Russia And Isolated Armenia With New Railway