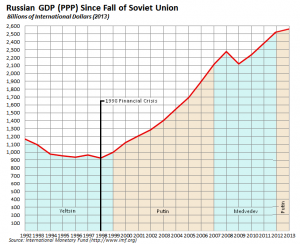 The Russian Federation may have slipped back into a technical recession at the end of 2017. According to analysis by JPMorgan Chase & Co., the Russian economy probably contracted in the last two quarters of last year, even though year to year data shows improvement.

“The Russian economy lost momentum in the second half after a very strong first half,” said JPMorgan analyst Anatoliy Shal. “The extreme weakness of the past couple of months comes as a surprise,” reported Bloomberg.

“Growth was driven by a number of one-off factors and now these are unwinding,” said Liza Ermolenko, an economist at Barclays Capital in London. “It does look like the output gap is pretty much closed, so there is not a lot of scope for the recovery to continue,” wrote Bloomberg.

Although the Kremlin has made progress closing the budget deficit and adding to currency reserves, slowing industrial output and weak consumer spending probably caused the contraction. A rebound in oil prices was not enough to continue positive growth. The rebound from the severe recession of 2014 seems to have not lasted very long, and based on government infrastructure spending. All you have to do is drive around Moscow and see the massive public works projects in various phases of construction to understand how important government outlays are to the economy.