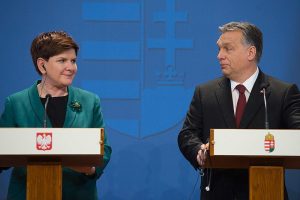 Poland’s Prime Minister Beata Szydlo easily survived a no-confidence vote in parliament today called by the opposition. There have been rumors however that the leaders of the Law and Justice Party (PiS) would like to see her replaced by finance minister, Mateusz Morawiecki, who may have a better hand in guiding the economy towards higher growth.

“Lawmakers voted 239-168, with 17 abstentions, to defeat a motion to topple Szydlo’s government which had been called by the opposition party Civic Platform. The centrist party accuses the current leadership of harming Poland with new laws that it says are anti-democratic and distancing the country from the European Union. The outcome of that vote was never in question given that Law and Justice, led by Jaroslaw Kaczynski, has a majority in parliament,” reported Associated Press.

Jaroslaw Kaczynski, the head of PiS and shadow-leader of the Polish state, also may want a different individual to deal with the challenges faced by the aggressive tactics of the European Union against Poland. More information could come out later today as party leaders meet into the night to discuss Szydlo’s future.