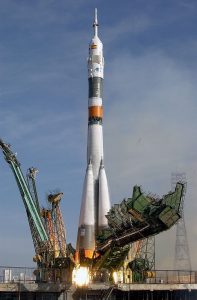 The failure of the Soyuz 2-1b rocket launch recently has continued a depressing trend for the Kremlin, with 10 failed launches during the tenure of Dmitry Rogozin, the deputy prime minister in charge of the defense industry. In a recent Kremlin meeting on the subject, Russian Prime Minister Dmitry Medvedev said the failures had “become a repetitional issue” for the country. “Dmitry Olegovich, I hope you understand the seriousness of this matter,” he said, reported The Independent.

We have reported repeatedly on the loss of marketshare for Russian commercial satellite launches due to the rise of SpaceX. The Russian share of the international market has shrunk from an overwhelming majority to approximately 30%.

“Up until an hour after launch, everything was going fine. It was only the second launch at Russia’s new far-eastern Vostochny Cosmodrome, so there was a festive atmosphere. The equipment — the Soyuz 2-1b rocket, Fregat booster, and associated payload of 19 satellites — was well-worked and considered reliable. The rocket was a direct descendent of the one that sent Yuri Gagarin to space, and has been refined thousands of times since…Three hours later, of course, Russia’s space corporation Roscosmos admitted “anomalies.””, wrote The Independent.

The cause of the failure is most likely faulty components of the rocket’s construction. The vehicle’s design has been well proven.

The Soviet Union, and the Russian Federation, have used their capability in the space industry as a badge of honor in international relations. The recurring failures are a stain on the country that Russians take personally.

Corruption, intense security, restrictions, and shrinking recruitment of young engineers, could be the cause of the low quality of hardware being built by Russian industry.