The International Olympic Committee (IOC) today barred the Russian Federation from participating in the 2018 Olympic Games in South Korea over an alleged state-sponsored doping program to allow Russian athletes to win medals during the 2014 games in Sochi. The Kremlin reserved its right to respond to the sanctions in due time.

The IOC will allow individual athletes from Russia to compete as neutrals “under strict conditions” at the PyeongChang Games, with uniforms bearing the name “Olympic Athlete from Russia,” reported NBC News.

“This was an unprecedented attack on the integrity of the Olympic Games and sport,” IOC president Thomas Bach said in a statement. “The IOC [executive board] after following due process, has issued proportional sanctions for this systemic manipulation while protecting the clean athletes. This should draw a line under this damaging episode and serve as a catalyst for a more effective anti-doping system.”

Russia has denied there was a state-sponsored doping program. The widespread doping was Leaked by an insider in the Russian sports system. “The IOC announced it had banned Russian government officials from the games. It also imposed a fine of $15 million on the Russian Olympic committee to pay for investigations and future anti-doping efforts,” wrote NBC News.

The decision caused widespread outrage and consternation in Moscow and throughout Russia, with many people saying this was the end of the Olympic Games. Below is a meme posted circulating stating, The End of the Olympics. 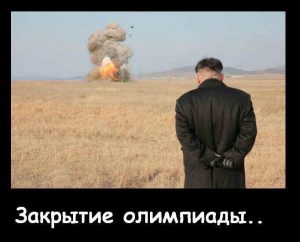