Former Mayor of Odessa and President of Georgia Mikheil Saakashvili called today for another protest camp in the city’s main square, or Maidan, where over one-hundred were killed in 2014 during demonstrations against then President Yanukovych who was eventually deposed.

The call for the Maidan protest camp is significant and has a special meaning for Ukrainians. The ‘Heavenly Hundred’ who were killed invoke Ukrainian pride and patriotism. Memorials continue for them in Maidan to this day. 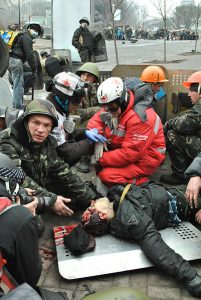 “Anti-corruption campaigner Mikheil Saakashvili is urging Ukrainians to set up a protest camp in Kiev’s main square if parliament fails to adopt a law on presidential impeachment within a week,” reported Associated Press.

“Police said the demonstration organized by Mikheil Saakashvili’s Movement of New Forces party attracted 2,500 people, but local reports said about 5,000 people participated. The demonstrators dispersed peacefully after marching through the city center and holding a rally on European Square. Antigovernment protesters set up a tent city outside the parliament building on October 17, calling for the cancellation of parliamentary immunity, the creation of an anticorruption court, amendments to election laws, and legislation on the impeachment of the president,” reported RFERL.