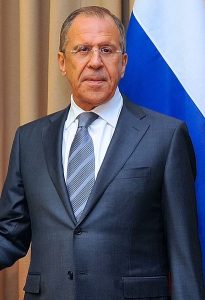 Russian Foreign Minister Sergei Lavrov said today in a press conference that Moscow would close an American consulate in Russia for ‘diplomatic parity.’

He reiterated that when Moscow asked Washington to even out its diplomatic staff in Russia to the number of Russian diplomatic staff in the US, it showed goodwill and “included in this mainstream all those working in the Russian permanent delegation to the UN,” reported Russian state news agency TASS.

“The United Sates has ‘pocketed’ our kind move and said, ‘Russians want parity, then they should close one of the four consulates general, because we’ve got only three consulates general in Russia…As long as the US took parity as a criterion,” Russia will act in kind, he warned.

The American closure and follow-on searches of diplomatic property inside the United States recently gave Moscow an opportunity for PR points which it dutifully fanned throughout its social media presence.

However, the events were not well publicized within Russia itself as the searches many believed made the Kremlin look week. The social media outrage was mostly for foreign consumption.