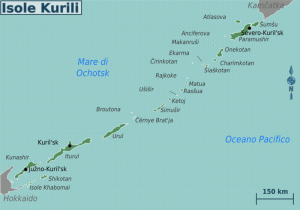 Russian President Vladimir Putin said today while speaking to the Third Eastern Economic Forum in Vladivostok, that Russia is planning to build a bridge to Japan for peace.

“We are planning to build a bridge on Sakhalin that would connect Sakhalin to Hokkaido,” Putin said at the Third Eastern Economic Forum in Vladivostok, reports The Moscow Times.

“These are things of an absolutely global nature that could lead to significant changes in infrastructure, energy, and high technology.”

Russia and Japan have not signed a peace treaty since the end of World War II. The Kuril Islands remain disputed territory as they were seized by Soviet forces during the war. The Japanese call them the Northern Territories.

The Japanese Prime Minister, Shinzo Abe, also spoke at the conference and said the two countries had “a duty to draw a line under this abnormal situation, when there is still no peace agreement.”

For Russians, Trump’s Moves On Consulate, Trade Mission Will Leave A Mark