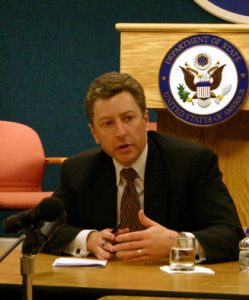 Following U.S. Secretary of Defense Jim Mattis commenting on America providing lethal weapons to Ukraine, US Special Representative for Ukraine Negotiations Kurt Volker said that U.S. and Russian relations may be ‘crippled’ by the conflict.

“The relationship between Russia and the US is important, and it’s going to be crippled by this problem in Ukraine,” he said, reported Russian state media TASS.

“Russia was ‘going to have to make some fundamental decisions’ on whether to comply with the Minsk accord aimed at bringing peace to east Ukraine and pull its forces out of the region.”

“[What] the Trump administration now is looking at [is] do we continue this rejection from the Obama administration, or do we change? There isn’t any new decision yet, but at very senior levels people are taking that very seriously…Of course, it has to be a decision from the president,” he added.

The comments by Volker reflect a possible change in the Trump administration’s policy towards Ukraine and Russia. As with North Korea, The White House seems to be laying down a tough line for possible forthcoming negotiations. We will see if Russia calls their bluff.