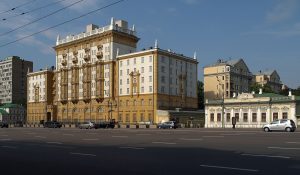 Russia retaliated against American diplomatic interests in Russia today after threatening to do so for weeks. The Kremlin ordered a dacha used by U.S. diplomats as a retreat seized as well as a warehouse used by the American embassy in Moscow. In addition, the Kremlin reduced the number of diplomats allowed in Russia to the number Moscow has in the United States. The moves came on the heels of additional sanctions against Russia, North Korea, and Iran being approved by the U.S. House of representatives.

“The Russian side is suspending the use of all storage facilities on Dorozhnaya Street in Moscow, and a cottage in Serebryaniy Bor by the US Embassy in Russia as of August 1,” the ministry said in a statement, reported Russian state news agency TASS.

Regarding the reduction of diplomatic personnel the ministry said, “This means that the total number of personnel involved in the American diplomatic and consular institutions in the Russian Federation is reduced to 455.”

“However, recent events indicate that Russophobia and the policy aimed at open confrontation with our country have reigned supreme in some circles in the US,” the Russian Foreign Ministry said.

“In the case of new unilateral actions of the US authorities to reduce the number of our diplomats in the US, it will be followed by a tit-for-tat response,” the Foreign Ministry stated. “We reserve the right on other mutual measures, which can affect US interests.”

The sanctions measure against Russia and others will most likely land on President Trump’s desk. It is unclear if he will sign the bill. The White House has put forth a confused message on the issue, preferring to have flexibility in how it deals with the Kremlin.