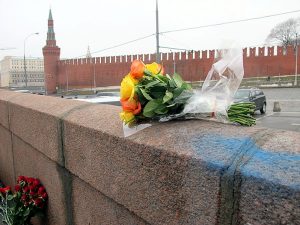 Five men were convicted in Moscow of killing Kremlin opponent Boris Nemtsov. He was shot in the back six times while walking along a bridge near the Kremlin with his girlfriend.

Zaur Dadayev, Temirlan Eskerhanov, Khamzat Bakhaev and brothers Anzor and Shagid Gubashev were found guilty at Moscow’s Military Court on Thursday afternoon. The five men were charged with Nemtsov’s death in December 2015. A sixth suspect, Beslan Shavanov, killed himself with a grenade while resisting arrest, reports The Moscow Times

The perpetrator Dadayev was formerly with the Chechen security forces. Many analysts have suggested that Chechen elements killed Nemtsov to provide the Kremlin plausible deniability. The Moscow Times reports that Nemtsov’s family pushed for higher-ranking officials to be investigated, apart from the men that were convicted.

The men were reported to all have various roles in the killing on Moscow’s Bolshoi Moskvoretsky Bridge in February of 2015. They were each said to have been paid $240,000.

Other political figures have been attacked as well. Putin critic Vladimir Kara-Murza believes he was poisoned by the security services. Presidential Alexei Navalny was injured and lost vision in one of his eyes after being attacked with chemicals thrown in his face.