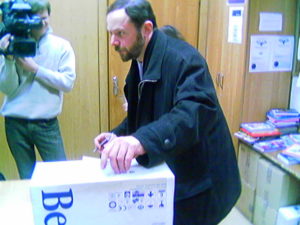 Vladimir Kara-Murza, a colleague of Kremlin critic Boris Nemtsov, who was shot to death 2 years ago outside the walls of the Kremlin, has left Russia after a second ‘poisoning.’ Kara-Murza laps into a coma a month ago and recently recovered enough to travel. The attack two years ago nearly killed him as he experienced renal failure.

Russian authorities refused a request in investigate the incident but laboratories abroad found high levels of heavy metals in his blood. This recent attack saw him put on a ventilator and renal dialysis.

“This morning Vladimir Kara-Murza flew out of the country… to go through rehabilitation treatment after his second acute poisoning,” lawyer Vadim Prokhorov wrote on his Facebook page.

“The diagnosis in his hospital discharge report is still the same: ‘toxic influence of an unknown substance’,” he added.

Kara-Murza currently works with the Open Russia foundation of Mikhail Khodorkovsky, who was self-exiled to Switzerland after spending ten years in a Russian penal colony after the state broke up his energy company, Yukos.

“Besides his work with Khodorkovsky, Kara-Murza has been deeply involved in lobbying in the United States for the expansion of the Magnitsky Act, which Prokhorov said “could be one of the reasons” for the poisoning because it targets Russian elites,” writes AFP.