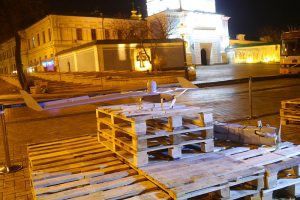 Ukraine pitched its defense industry capabilities to diplomats from 16 countries this week at a meeting at the Ivan Chernyakhovsky National Defense University of Ukraine. The representatives were from Asia, LATAM, Pacific, and Africa.

“Our enterprises made a significant step forward,” Ukroboronprom Director General for Development Artur Kheruvymov said in a speech at the meeting. “Having experience of using military equipment in hybrid warfare, we have significantly improved and deepened modernization of the existing samples and started production of new models of the military equipment,” reported UPI.

The Ukrainian enterprise said products offered include unmanned aerial vehicles, communications gear and a variety of weapons. After the annexation of Crimea and the initiation of the conflict in the Donbass region of East Ukraine, the Ukrainian military had to literally rebuild itself from scratch.

Many of the capabilities discussed have been tested in battlefield conditions in Donetsk and Luhansk against pro-Russian separatists.