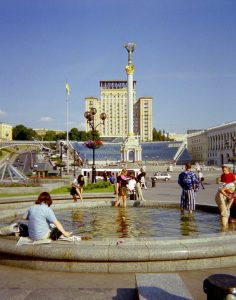 A small explosive device was thrown over the fence at the US embassy in Kyiv Wednesday night, causing a small grass burn. There were no injuries. The Ukrainian government classified the incident as terrorism but the US government said it was too small and declined to classify the incident as such.

“We can confirm that there was a security incident involving a small incendiary device shortly after 12 a.m. June 8 at the Embassy compound,” read the statement posted on the embassy Facebook page Thursday.

“There was no damage to Embassy property. No personnel were injured. All Embassy operations are continuing as normal. At this time, we do not consider this incident a terrorist act,” reported IBT.

“The event is properly registered, initiated criminal proceedings under Art. 258 (act of terrorism) of the Criminal Code of Ukraine. Conducted operational-search measures to establish those involved in the crime,” reads a translated version of the Ukrainian police statement from Thursday.