Kozeta Cika contributed to the writing of this article 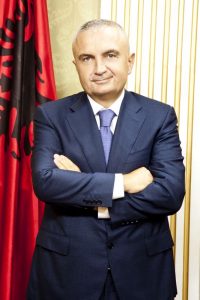 The Albanian Parliament elected Ilir Meta as the new President of the Republic of Albania.

Ilir Meta, the current Head of the Assembly, and now the former leader of the “Socialist Movement for Integration” Party, also held other important posts during 26 years of democracy, like MP for 26 years, Prime Minister and Foreign Minister of Albania. In the past, Meta has been labelled as corrupt by the Socialist Party after the release of a video about considerable amounts of money in 2011. For the last four years, his Party has been part of the government. During the session of the Albanian Parliament of April 28, called to elect the new president of the country, the Law Commission made formal verifications regarding Ilir Meta’s public figure purity and his constitutional obligations. After reviewing the file, the commission unanimously voted for Meta’s candidacy, considering him as a person in line with the legal basis.

The 48-year-old Meta was elected after three previous efforts to elect a new President had failed. He was nominated by the Socialist majority and his Party’s MPs.

Two MPs voted against his election, one of them was Ben Blushi, a former Socialist Party member, and now in opposition, as the Head of LIBRA Party. Blushi announced the reasons why he voted against Ilir Meta, mentioning that Meta was the man who needed to do more to resolve the current political crisis, but made no effort. He called him President of a Republic that is not able to hold free elections, of a Republic where nobody is ever punished for crimes and corruption.

His election was also supported by some other parties’ MPs. The Democratic Party of Albania, involved in non-parliamentary protests for several weeks, had declared against Meta’s candidacy. The Democratic Party leader, Lulzim Basha, pointed out that the same person, Edi rama, who years ago attempted to imprison Meta, the political rival for whom he filed a gangster conspiracy, was forced to elect him president of the corrupted “Rebirth”. He called that moment desperate for the Prime Minister.

Ilir Meta was elected President in an empty hall, abandoned by the opposition and boycotted by the diplomatic corps in Tirana. After his voting, there was neither celebration, nor cheering, except for some faint applause of the Socialists. In his speech, Meta said that between power and democracy, he has always chosen the second. He made an appeal to all Albanians, not to turn the country into a second Macedonia and to give opportunities for all its citizens to freely vote in the elections. He added that he hoped to have his oath as president in front of all Parliament members on July 24.

Ilir Meta’s election as President of Albania has garnered a lot of negative reaction in social media. A lot of people have ironically stressed the fact that a public figure, backbitten for corruption, is elected as head of the State. Some media have also refreshed previous criticism, on the part of socialists, regarding Meta. There have been voices that his election is meant to be a surefire way to protect him from the vetting process and close forever his political file full of doubts and accusations.