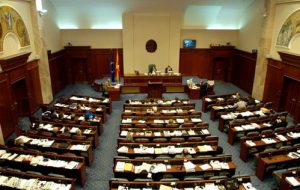 The violence that swept the Macedonian parliament on April 27 was owed to the fact that politics in the Former Yugoslavian Republic have been blocked since last December’s indeterminate elections. Violence broke out on the pretext that Talat Xhaferri, an Albanian, was elected as Assembly Chairman. Xhaferri was voted in by the SDSM, the Alliance for Albanians and the “Besa” Movement MPs. 67 votes went in favor of his election, while VMRO-DPMNE did not take part in the voting. Shortly after the voting, Xhaferri swore in front of the MPs.

Instantly, the session was overwhelmed by great tension and animosity. The Chair of the Assembly was “occupied” by VMRO MPs. Protesters entered the legislating premises, forcing out the SDSM MPs and destroying everything. Among the injured was Zoran Zaev, political leader of the Social Democratic Union of Macedonia, and Sela, the Albanian Party Chairman. Even other MPs suffered injuries from the clashes.

Police intervened after a delay. The slow response was condemned by the international community. Albanian and SDSM’s members blame Nikola Gruevski, head of the ruling VMRO-DPMNE party, for organizing such violence. The people who attacked Parliament were angered by the coalition’s decision to elect the Albanian Talat Xhaferri as chairman. They are afraid that moves to improve the Albanian status will threaten Macedonian unity. Some 200 masked protesters broke windows and witnesses say they have seen blood stains in the corridors. Police used tear grenades to disperse protesters and allow the politicians to leave Parliament.

Yesterday, the AFP news agency reported that according to the Ministry of Internal Affairs, 102 people were treated in the hospital, including 10 MPs and police officers. Just two minutes after the decision of Macedonian President, Gjorgji Ivanov, not to give the mandate to Prime Minister Zoran Zaev, the Russian portal ‘Sputnik’ posted this headline, giving a great weight to the rest of the statement. “Tirana’s Platform collapses,” accompanied by Ivanov’s photo, and gave the news of the rejection of the mandate. “Ivanov, who was not voted for by the Albanians of Macedonia, issued two declarations by decree: first, he declared war on the Albanians of Macedonia and secondly on a neighboring country like Albania”.

For the first time, a Macedonian official claimed openly that he will not allow a government with Albanians as partners.

But what happens next? There is certainly only one way-Ivanov and his boss, Gruevski, have chosen-a collision with Albanians. “A brave men’s neighborhood”, but larger in size.

As a consequence, the Ohrid Agreement was dropped, but also the future of Macedonia in the some way. Ivanov has rejected not only a government, but Albanians taking part in the government as an equal partners. He wants Albanians only to share posts, but not platforms and projects. What is more important, is that Ivanov has opposed the United States and the EU by choosing Russia. Last night, Washington approved Zaev’s mandate, but Ivanov refused to accept it.

“Starting from today, there is a new front opening in the Balkans, a new conflict that is expected to escalate with every passing day”, “Sputnik” wrote.

The Interior Minister of Macedonia, Albanian Agim Nuhiu, resigned after the violent riots. In a media statement, he said: “As minister, I condemn the Assembly of Macedonia’s events of 27 April. Some parts of the Ministry of Internal Affairs did not carry out their job, for which they will be held accountable.”
SDSM leader, Zoran Zaev, who was seriously injured during the violent protests, appeared bandaged in the press conference, condemning forcefully the parliament violence, considering it as a deliberate assassination attempt. Four people have been arrested, out of 15 searched for by the public Prosecution, for participating in the events. According to Alsat Macedonia, one of the four is the Chief of Security and Counter-Intelligence Department. The 15 suspected people are unofficially part of the group that occupied the premises of the Macedonian assembly.

Macedonia is a country where about 30 percent of the population are composed of ethnic Albanians, who do not enjoy many rights. One of these is bilingualism, although this is an essential democratic right, written in law since the 1960s.

What Really Happened In Crimea?