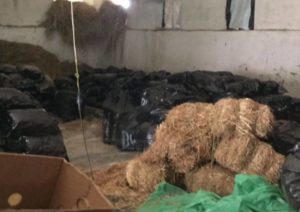 In Albania, almost every day, a dozen people are arrested for producing and trafficking narcotic drugs, where large quantities of marijuana are seized, varying from few kilograms to several tons. Albania seems flooded with drugs. Frightening statistics show that a large amount of contraband is seized on Italian shores, coming from Albania; however, no one can accurately measure the amount of drugs that are successfully crossing the Albanian border to their destination.

It is useless to say that this has no connection with certain government actors. During the police action on 11 April, which was called by the media as a mega international raid, in cooperation with Greek and Macedonian police, 22 people who cultivated and smuggled drugs were arrested. Likewise, a large amount of drugs and a considerable sum of money were seized, as well.

However, the most shocking event was the discovery by police of a warehouse in the southeast of Albania, in Pagri (Permet), where about 12 tons of drugs were seized, going through the drying process inside an abandoned warehouse that served village residents to store livestock food. Several people were arrested, including the village reeve; disciplinary measures against the police were much softer. One police inspector was suspended and a few others were fired. This operation was initiated by the Prosecution Office, after receiving reports from law-enforcement channels. This amount, according to police sources, brings the total amount of seized drugs to over 20 tons since the beginning of the year. Meanwhile, there has been no police notification on how and where this drug was cultivated.

Drugs going through the drying process show that it was grown artificially or inside residential buildings, or in other facilities, especially created for cultivating marijuana in an artificial way, by using floodlights in seasons when it cannot grow naturally. Just in Ancona Port, Italy, 12 tons of drugs coming from Albania were seized. Of this amount, 8 tons entered Albania from Macedonia, showing that the country still serves as a transit route for narcotics. Furthermore, 2.2 tons of this seized quantity was hidden inside an Albanian truck, as soon as it arrived at Ancona Port.

There are many cases in which large quantities of drugs were seized after traffickers abandoned their speedboats or places where they kept marijuana, after having been detected by the police.

In early April 2017, 1 ton of drugs divided into 96 packages, ready to be trafficked in Bristani Bay, Karaburun Peninsula, was seized. The drugs were hidden in the bushes. One thing is sure; the abandoned warehouses, belonging to the former socialist system, are restored to work. Even in Berat district, such a storehouse was used for keeping drugs safe. In most cases, police seize narcotics, but not their producers. Usually the producers are not identified, nor prosecuted. There have been cases when traffickers have built underground tunnels to conceal tons of drugs ready for transportation to Italy.

In every case, the opposition has maintained that these large drug amounts are associated with heads of state, accusing directly the current socialist government.

In the case of the 12 tons of drug seizure, former Prime Minister of Albania, Sali Berisha, directly accused Minister of Internal Affairs last month, Saimir Tahiri, and others connected to him, as the main people responsible for the narcotic trade in Albania.